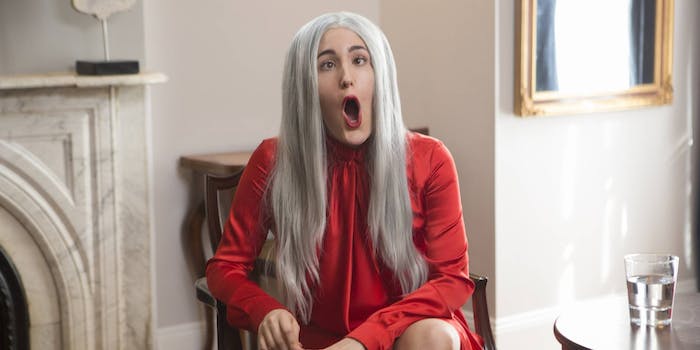 'The art obsession in the comedy world is very new.'

When Kate Berlant graced the stage of performance/video artist Dynasty Handbag’s new monthly show Weirdo Night at El Cid late last month, she admitted that she was having some problems leaving the stage. She kept walking off and returning, as if some force kept drawing her back. Either way, audience members wanted her to stay.

Luckily, no one will have to wait for Berlant to stay or go because her new Netflix special is out today. She joins seven other up-and-coming comedians like Lauren Lapkus (Orange Is the New Black) and her best friend/collaborator John Early (Wet Hot American Summer: First Day of Camp) in dropping a 30-minute episode for Netflix Presents: The Characters.

Berlant’s episode plays with the now-familiar archetype of a famous female artist living in New York City who is so accomplished, no one can ego-check her. The episode follows her latest “masterpiece”: a chance to work with Sprite. None of her friends, students, or colleagues dare say anything about the fact that she’s just making corporate commercial art. Slowly we learn more about this character, including her privileged upbringing in Palm Springs and unabashed denial of anything possibly problematic with her work.

How long have you been working on this Netflix special?

They told me in April, and then it was shot in August. We shot it all in New York in August, except there’s a part of mine that was also shot in L.A.

What can you tell me about it?

Everyone who was given a Netflix special has to play at least three characters. I wrote 30 minutes of new material. They’re all new characters, and they’re loosely tied to the main character who is an artist woman. I also play the characters surrounding her.

Oh, what kind of artist is she? Established? Or is she just “emerging”?

So she is older?

Yeah, definitely older than me.

Speaking of Marina Abramovic, my Twitter handle right now is “writer is present,” which is very much a reference to Marina’s project The Artist Is Present. I’m wondering, what’s your artist character like?

The character I play is an artist who is very famous but bored with herself, but she can’t do anything to not impress people. The special is loosely built around a big exhibit that she has, and it’s her dealing with the pressure of that and also not being able to escape people’s respect. She’s someone that can do no wrong. Even if she makes shit, people proclaim her a genius.

Why did you choose this type of character?

Do you think is there a way for the art and comedy worlds to happily coexist or do they just play off of each other?

Even though I feel like I am often dealing with that question about how they overlap, I don’t have an answer.

Maybe it’s about a difference in type of humor. Art humor is usually pretty dry and not very “haha” funny, whereas comedy has to make the audience laugh out loud.

Also art isn’t supposed to be entertainment and comedy is.

Right, and if you become too entertaining in your art it’s no longer considered art. Maybe it is more a question of art as “high-brow” and comedy as “low-brow”?

I think it might be too easy. The art obsession in the comedy world is very new. When I started there wasn’t this new brand of comedian.

You mean the art comedian? Or artists doing comedy?

I think more people going to art school, and comedy is also becoming more popular, and the Internet has played a role in this change, too.

Interesting. So back to the Netflix special. Are you playing only female characters?

I also play two men. I play the artist’s gallerist and her husband, and I also play a couple of other small, goofy characters. These are new characters. I only have one character I ever do, which is my self-help character named Karen. I’ve done stuff with her for years.

How was it working on characters rather than standup?

Great! So fun. It’s the first time I’ve written anything this long; it’s so surreal to write something and then immediately see it made. It was great and scary.

Do you feel like your Netflix special will cause a stir in the art world?

What are your hopes for the special?

This sounds so pretentious, but I truly hope people like it. I can’t aim for anything beyond that.