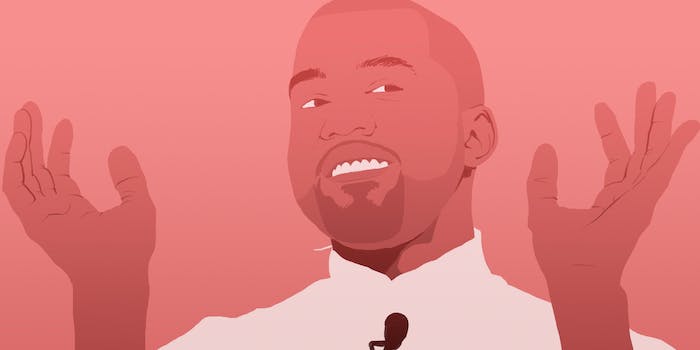 The problem with those 2 ‘new’ Kanye West songs

Rapper and fashion hero Kanye West made a splash on Monday with the release of two new tracks. But it’s complicated.

One of the tracks features tinkering, Auto-Tune vocals spread over the beat from the Weeknd’s “Tell Your Friends”—a months-old track West himself helped produce. Dubbed “When I See It,” it’s a playful outtake about “being in the wrong place at the right time” and generally hanging out during the summer. Clocking in under two minutes, the streaming song is barely a doodle.

The other is a veritably expansive, sweltering arrangement of 2008’s “Say You Will.” This remix is a spotlight for violinist, composer, and singer Caroline Shaw, whom West featured this month for a Democratic National Committee fundraiser in San Francisco.

However, the songs appear to have hit West’s new SoundCloud page 14 days ago and only began to gain attention when highlighted by his long-time barber Ibn Jasper on Instagram.

West has yet to address the tracks publicly, though it’s highly unlikely that they’ll appear on his next record, tentatively titled Swish. (One is seven years old; the other from an old beat. West would never retread like that. Come on, fam.) It is, however, interesting that one of music’s made modern voices felt compelled to play the young man’s SoundCloud remix game at all. No Tidal or Apple Music exclusives, just easily disseminated MP3s that play out like mixtape B-sides.

Listen to them on West’s SoundCloud page.