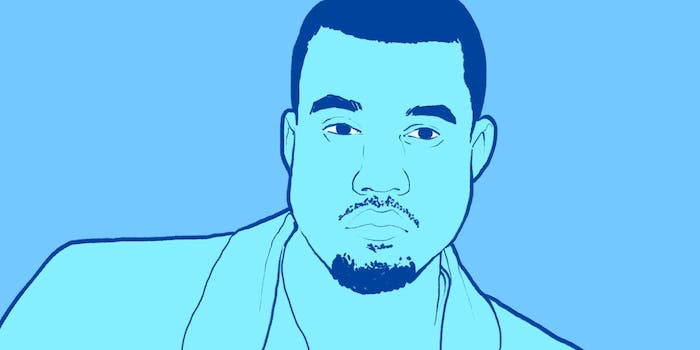 Kanye West’s ‘The Life of Pablo’ heads to No. 1 based on streaming success

Late last month, a song from Kanye West‘s The Life of Pablo, formerly a Tidal exclusive, popped up on Spotify and Apple Music. Then the whole album appeared on both streaming services. West claimed TLOP and its many public edits made it a living, breathing entity—one that just lumbered to the top of the Billboard 200 chart.

West’s album is the first to hit No. 1 with more than half of its units generated from “streaming equivalent albums,” according to Billboard.

The album is set to hit No. 1 on the April 23 chart, and a Def Jam rep told Billboard that TLOP‘s Nielsen Music sales—which subscription service Tidal did not initially report—would now be reported. Those numbers put West ahead of country singer Chris Stapleton, whose album Traveller has similarly been dominating airwaves.

The living, breathing Pablo has been an unprecedented release due to its many iterations. West initially withheld direct sales by releasing it on Tidal, but the album was pirated nonetheless.

West had initially claimed that the album wouldn’t be on Apple Music, or for sale. He changed the lyrics on songs post-release. He compared his tweets to art. This No. 1 hit is yet another rip in the fabric of traditional album releases.

West has still not announced plans for a physical release.