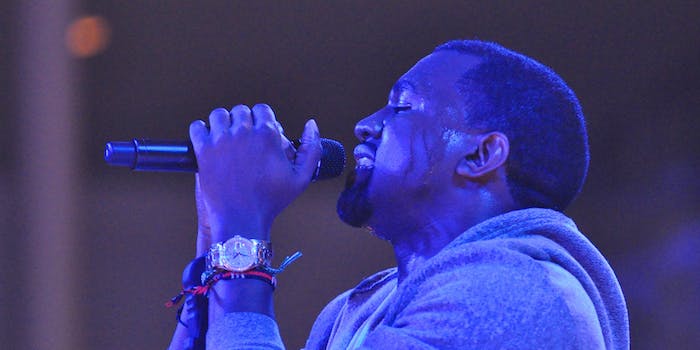 Here's the problem with your armchair diagnosis.

Twitter: A great social media platform for sharing news. Also, a not-so-great platform for speculating on the mental health of anyone in the public arena, contentious rappers included.

After Kanye West was hospitalized on Nov. 21, for exhaustion and sleep deprivation, the internet buzzed with speculation over the rapper’s admission.

The context of West’s hospitalization was crucial in the internet’s highly qualified, very professional clinical diagnosis of the artist—that weekend West had gone on a political rant and cut his show short in Sacramento, California. And just days before that, West interjected parts of his San Jose, California, tour stop with other political musings, including a retroactive endorsement for President-elect Donald Trump.

On Thursday TMZ reported that West’s doctor told cops he was “suffering from a temporary psychosis” induced by sleep deprivation and extreme dehydration.

Hmm Kanye has mild Ausbergers? As far as bullshit Twitter diagnosis go that one seems more likely than most.

Even a few journalists, such as writers at Refinery29 and MamásLatinas, jumped into the ring to try their hand at classifying West’s behavior.

But the presumptive tweets and armchair reporting missed something: Giving a professional opinion of West’s clinical diagnosis is probably something that we, the internet, are not qualified to do, and therefore should not attempt.

Let's be careful not to "diagnose" Kanye West as having mental issues. I know I'm not certified to. Mis/Pre-diagnosing can be dangerous.

I dislike Kanye, but unless you're a psychiatrist treating him, can we refrain from armchair diagnosis? It makes you sound like a fuck bag

Amid the hot takes regarding the West rumor mill and how we exploit celebrities with mental illness, one clip circulating Twitter puts West’s hospitalization into a different context.

During a 2006 episode of Inside the Actors Studio, comedian Dave Chappelle discussed how comedian Martin Lawrence suffered a heat stroke while preparing for a movie in 1999, and the circumstances under which celebrities are deemed “crazy.”

“A weak person cannot get to sit here and talk to [host James Lipton], ain’t no weak people talking to you, so what is happening in Hollywood? Nobody knows,” Chappelle said. “The worst thing to call somebody is crazy—it’s dismissive… These people are not ‘crazy,’ they’re strong people. Maybe the environment is a little sick.”

Here’s what we know: West is still in the hospital. On Monday his exit from the hospital was reportedly delayed due to his condition, according to TMZ. He’s apparently paranoid, and that’s made medical contact with him difficult. Kim Kardashian flew to Los Angeles to see him.

We’ll stick with that for now.