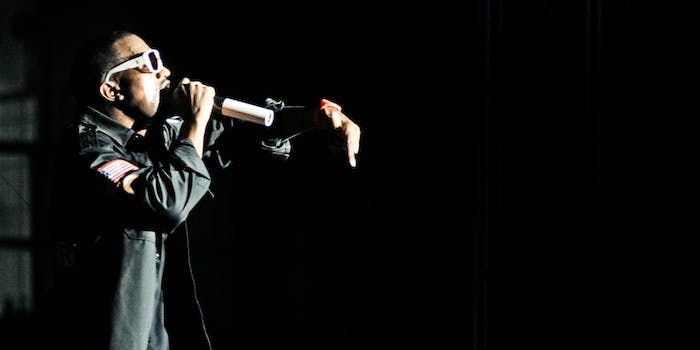 You can't just beat up a drone that's flying over your house.

How weird is the drone situation getting in America? Bad enough that Kanye West is officially throwing them into his filed legal dispositions.

In a March deposition acquired Wednesday by TMZ, the iconic rapper notes that he and his wife Kim Kardashian live in constant fear of photography drones flying onto their Bel Air, Calif., property and snapping photos of their family in privacy.

“Wouldn’t you like to just teach your daughter how to swim without a drone flying?” he writes in the lawsuit, filed against the LA photographer Daniel Ramos after West attacked him last July. “What happens if a drone falls right next to her? Would it electrocute her?”

The rapper cycles through a series of other scenarios in which drone use on his property may have a harmful effect on his family life.

West accepted two years probation for a misdemeanor battery conviction in March and was forced to attend 24 anger management sessions and perform 250 hours of community service. Ramos wasn’t content with the conviction, however, and sued West shortly after.

And now Kanye West hates drones, because he can’t beat one up when it’s flying over his house.