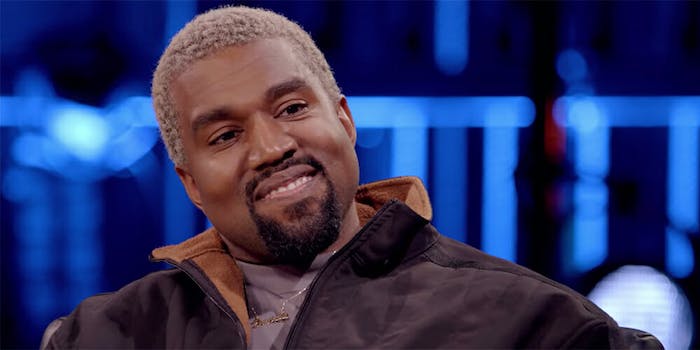 The interview airs May 31.

Kanye West returns to the public eye in a new episode of David Letterman’s Netflix show My Next Guest Needs No Introduction. In the interview, the first of the show’s second season, West talks about his mental health, his long-standing beef with Drake, and why he feels liberals are “bullying him.”

“When you’re bipolar, you have the potential to ramp up and it can take you to a point where you start acting erratic,” he says in the interview, referring to his viral on-air meltdown at TMZ’s office last year.

He also admits that he and Drake had a feud last year but states that he is “not allowed to mention him or any of his family members,” and pivots to quoting one of his favorite Drake lyrics.

Later on, Letterman and West begin to talk about politics, specifically about the rapper’s fascination and support for President Donald Trump.

“This is my thing with Trump: We don’t have to feel the same way, but we have the right to feel what we feel,” West says. When Letterman later asks if West voted for Trump, the rapper responds, “I’ve never voted in my life.”

“Then you don’t have a say in this,” Letterman says as the audience begins to cheers.

West then brings up his anti-13th Amendment rant, which caused intense Twitter backlash last year. He insists Trump voters are “treated like enemies of America.”

“Have you ever been beat up in your high school for wearing the wrong hat?” West asks. “Liberals bully people who are Trump supporters!”

Letterman changes the subject and shows high-quality footage from one of Kanye’s Sunday Services, which many have criticized as a means of self-promotion.

The episode airs on Netflix on May 31. The second season of the show will also include interviews with Tiffany Haddish, Ellen DeGeneres, and Melinda Gates.