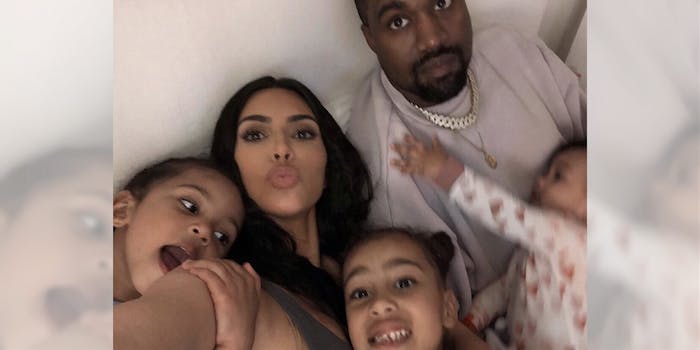 'We have everything we need.'

Kim Kardashian West on Friday revealed that Psalm is the name of her and Kanye West’s fourth child.

The big announcement came via a tweet that included a photo of the baby boy and a message from West.

“Beautiful Mother’s Day,” West wrote. “With the arrival of our fourth child/We are blessed beyond measure/We have everything we need.”

Kardashian had confirmed in a tweet last week that the baby, who was born via surrogate, had arrived. “He’s here and he’s perfect!” Kardashian tweeted on May 10. But her followers were left guessing at his name.

According to BuzzFeed News, the name Psalm might be influenced by West’s increased interest in religion. He’s been hosting a religious service—open only to family and close friends—at the couple’s home since the beginning of the year.

Unsurprisingly, social media reactions to the name of the newest addition to the family were mixed.

Psalm West coming out of the womb like.. pic.twitter.com/xbiokrG9Uq

Psalm is West and Kardashian’s fourth child after North (5), Saint (3), and Chicago (1). Kardashian has been open about her struggles with her first two pregnancies and the decision to use a surrogate for her third and fourth children.