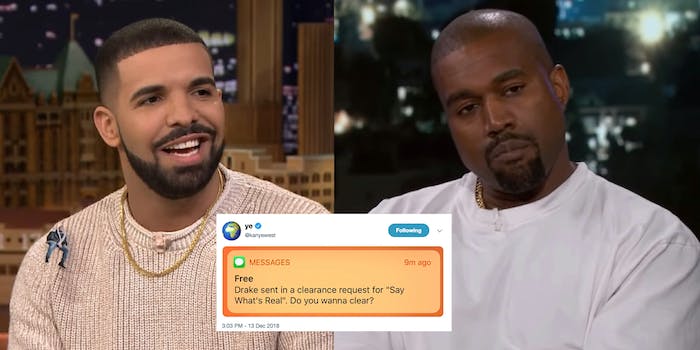 The ongoing beef between Kanye West and Drake came to a head Thursday as Ye took to Twitter in a brutally honest tirade.

It seems Drake’s clearance request for his 2009 song “Say What’s Real,” which owes its beat to Ye’s 2008 track “Say You Will” may have set off the “Gold Digger” rapper’s frustrated string of tweets.

“This proves shit faker than wrestling,” Kanye wrote, sharing a screenshot of the request sent by his producer Free. Twitter users buckled in, preparing to gleefully watch the drama go down.

HE OFF THAT GOOSE RIGHT NOW

He asks for an apology from Drake “for mentioning the 350s and trying to take food out your idols kids mouth.” He also reminds the Canadian rapper that he wasn’t the one who leaked news of Drake’s son to Pusha T, who then broadcast the information in his diss track, “The Story of Adidon.” Kanye explains he had no part in either the diss track or the ensuing hostilities between the two.

I told you I ain’t tell Pusha about your son

Meanwhile, Twitter users munched on their popcorn, eyes glued as it all went down.

I WANT ALL THE TEAS

“I need my apologies now,” Kanye implores Drake, admitting that their feud has been bothering him for a long time and he’d been trying to arrange a meet-up for “6 months bro.” “Stop this already bro. You getting people hurt out here. And over what.”

Shockingly, it appears Drake did just that. After sharing a Bible verse, Kanye wrote that the Toronto rapper had called him, and they’d put their fighting behind them. “Mission accomplished,” Kanye tweeted.

Waiting on drake to call pic.twitter.com/ExQZovpLBQ

And the request that started it all? Denied. “By the way…not cleared,” Kanye tweeted.

By the way… not cleared😂

Meanwhile, Drake’s remained quiet on the whole affair, save for a picture of a few laughing emoji on his Instagram story, apparently in response to the tweets. So, who knows, this could be just the beginning.