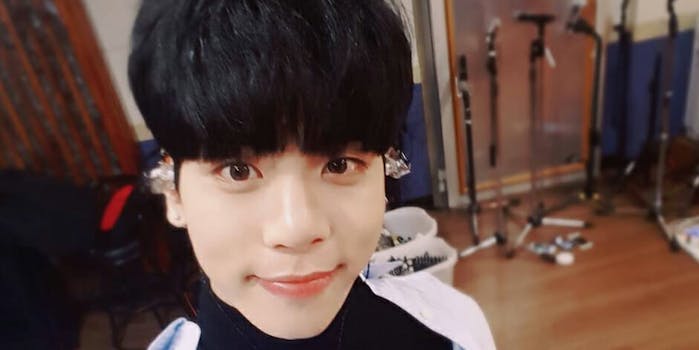 Police said suicide will be investigated as a possibility.

Jonghyun was found unconscious in an apartment in Seoul, at approximately 6:45pm local time, according to Soomoi. Emergency responders performed CPR and the singer was immediately rushed to the hospital, where he was pronounced dead.

The police visited the apartment after Jonghyun’s sister filed a report of disappearance. Soomoi said she had received an alarming text message from Jonghyun that said, “It has been really hard. Let me go. Tell me I did well. This is my last goodbye.”

Police told the BBC Korean Service that suicide will be investigated as a possibility.

Jonghyun was one of the five members of K-pop group SHINee, formed by SM Entertainment in 2008. Jonghyun debuted as a solo artist on January 12, 2015, with his first EP, Base. On May 24, 2016, Jonghyun released his first studio album, She Is, which rose to No. 4 on Billboard‘s World Albums and No. 20 on Billboard‘s Heatseekers Albums.

Aside from his music, Jonghyun was also an advocate for LGBTQ rights and was vocal about his opinion of the Korean government’s education policy.

Fans around the world paid tribute to the K-pop star on Twitter.

regardless of what fandom you're in, today the kpop community mourns together. I don't even know what to say, just that I'm sorry we lost you Jonghyun. I am a sone but damn this hurts like hell. RIP Jonghyun we will miss you dearly.

SM Entertainment has confirmed it. We lost the brightest idol tonight. Kim Jonghyun, the bravest human being I've ever known, someone who isn't afraid of differences, someone who's warm and kind hearted…

Rest in peace, Jonghyun. Let go of your pain. You lived well. Thank you.

rest in peace jonghyun. you were a strong, inspiring person to many and a brave fighter. you will always be loved and remembered. i'm sending my condolences to his family, friends and loved ones. i hope they find peace and strength. please reach out to the ones who are suffering.

Fans waiting outside the hospital said Jonghyun was transferred to the ICU and had not died. These reports were unconfirmed by the hospital and police, however, which both confirmed he died after reaching the hospital. SM Entertainment also confirmed he has died.

For more information about suicide prevention or to speak with someone confidentially, contact the National Suicide Prevention Lifeline (U.S.),  Samaritans (U.K.), or a South Korean suicide hotline listed here.