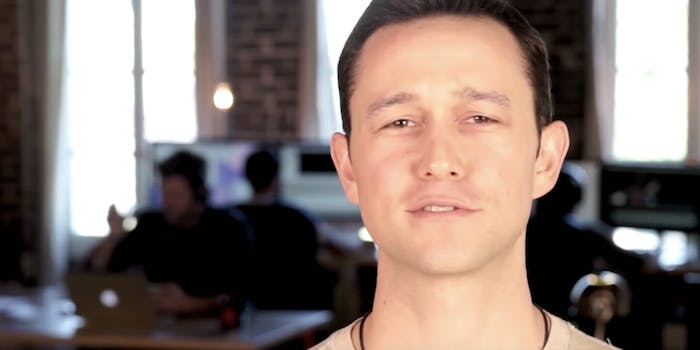 HitRECord wants to know what you think about privacy and government.

Joseph Gordon-Levitt’s company HitRECord is partnering with the American Civil Liberties Union on a video project documenting the intersection of technology and democracy—and Gordon-Levitt is using the money he made playing Edward Snowden to fund it.

“Is today’s technology good or bad for democracy?” Gordon-Levitt asked in his announcement video. “That’s the question I’d like you to answer for this project.”

He followed up with questions about the specific ways in which future technology might be good or bad.

Collaborative productions are nothing new for HitRECord, which has been producing content since 2004, but the funding source is: Gordon-Levitt’s entire acting fee from the Oliver Stone film Snowden, in which he played the NSA-whistleblower-turned-fugitive.

A portion of that money will compensate people whose contributions to the project end up in the final video, with the remainder going directly to the ACLU.

“Some people believe that the right to privacy is a cornerstone of democracy, and [that] without privacy, we don’t really live in a free country,” Gordon-Levitt said in the video. “Other people, and especially perhaps people who are so open about their lives online anyway, don’t seem to mind being watched. So I’m curious how you feel about it.”