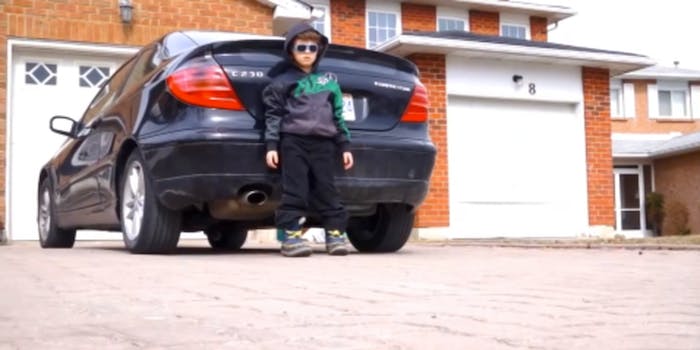 Is writing a rap song really this easy?

Finding musical inspiration when you’re a kid can be hard. You haven’t had that many life experiences just yet, so what do you sing about?

If you’re Jordan Bijan, now 6, you rap about cookies. In one minute, Jordan gives us the basics of writing a rap song, from the beat to the lyrics, which are mainly about cookies, cake, getting grounded, and having more street cred than Drake. The audio dub is bad. You want to look away, but you can’t.

This isn’t Jordan’s first musical production. Reddit has provided a link to his father Daniel’s YouTube page, which features many more clips of the “amazing” young Jordan performing covers of songs, as well as collaborating with his dad on covers. Is this just a ploy to get famous via his adorable child? Reddit thinks so, but they’ve been even more critical of the elder Bijan’s solo videos and his musical skills.

This certainly isn’t the first time a parent has attempted viral success by putting their child on YouTube. Hopefully, Jordan will find his own inspiration—and start writing more nuanced songs about cookies.