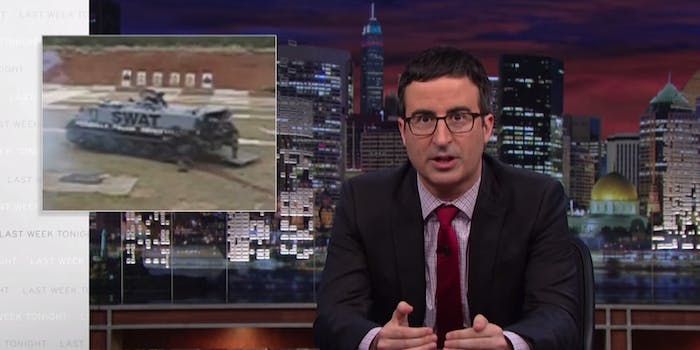 Even he can't make any sense of it.

As if he had any choice, Last Week Tonight host John Oliver has taken on the militarization of the police, and the confusion, racism, and violence that has erupted in Ferguson, Mo., over the past week.

All eyes have been on Ferguson since police officer Darren Wilson shot and killed 18-year-old Michael Brown on Aug. 9. In the past day alone, the results of Brown’s second autopsy came to light along with another night of violence and threats against citizens and the media.

There’s the occasional joke and he eventually parodies a song called “Die, Motherfucker, Die” in the must-watch segment. But he can barely contain his contempt as he tries to wrap his head around the events in Ferguson.

“I know the police love their ridiculous, unnecessary military equipment, so here’s another patronizing test: Let’s take it all away from them, and if they can make it through a whole month without killing a single unarmed black man, then—and only then—can they get their fucking toys back,” he said.

The situation in Ferguson has escalated even further since Oliver filmed his show, with Missouri Gov. Jay Nixon sending the National Guard—and that’s no laughing matter.