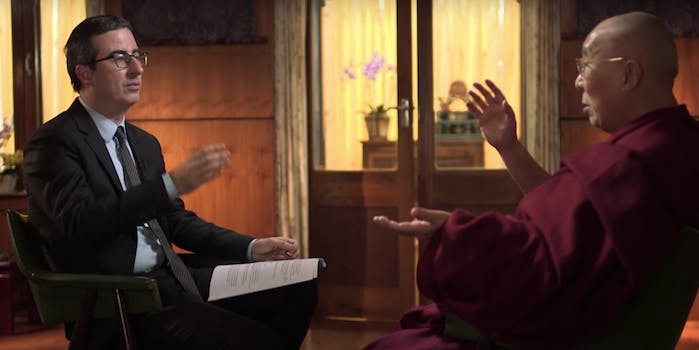 John Oliver gives the Dalai Lama a calculator watch as a parting gift.

If you don’t know exactly what the Dalai Lama does, you are not alone. On the latest episode of Last Week Tonight, John Oliver took to the streets of New York, and while almost everyone knew the Dalai Lama was a good, respected figurehead, no one could define what his role exactly was.

Not only does Oliver explain how important the Dalai Lama is to Tibet—and also how friggin’ big Tibet is (bet you had no idea)—Oliver goes one step further, traveling to India to talk with the Dalai Lama himself.

The two cover his possible plan for succession, given that the person who is supposed to pick the new reincarnation of the Dalai Lama is currently being held hostage by the Chinese. They also cover the difficult stance he is put in by Tibetans who choose self-immolation as a form of protest.

The Dalai Lama also claims to have gotten Mongolians to stop drinking vodka, which if you’ve ever had horse’s milk, that story automatically becomes a thousand times more impressive.