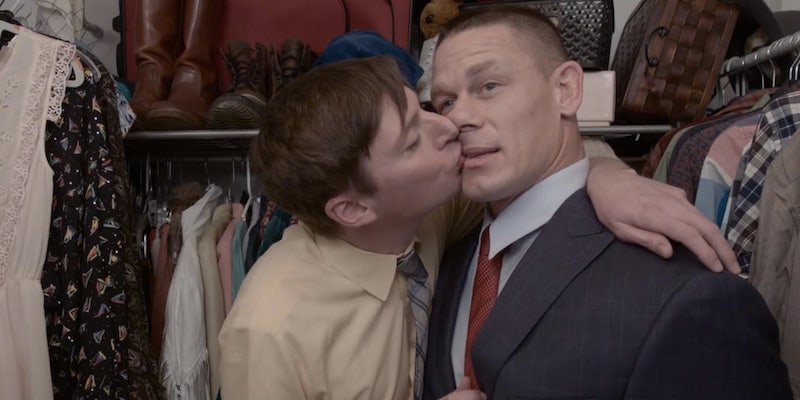 John Cena puckers up in ‘7 Minutes in Heaven’

Get intimate with Mike O'Brien in the close confines of a closet.

After a three-year hiatus, Mike O’Brien’s 7 Minutes in Heaven returns to YouTube with a John Cena lip-lock.

Above Average last produced the series in 2011, but it’s promising new awkward celebrity interviews in the new year. The series starts off as an interview between O’Brien and a celebrity in an intimate closet space, and ends with him going in for the requisite kiss of the teenage party game. After a chat about Cena’s past as a limo driver, the scents of his wrestling opponents, and his role in Sisters, he’s relatively amenable to O’Brien’s kiss.

“I think that probably is going to get me in so much trouble with my gal, but it was what you felt you needed to do,” he deadpans, before going in for his own “European” two-cheek kiss plus face slap.

O’Brien’s next guest will be Will Ferrell, but if you can’t wait for more 7 Minutes in Heaven, you can always revisit their back catalog of guests including Paul Rudd, Kristen Wiig, and Jeff Goldblum.

H/T Tubefilter | Screengrab via Above Average/YouTube