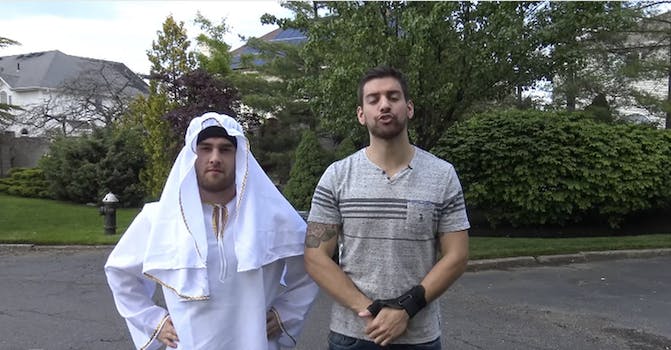 JoeySalads speaks out in defense of his video and its timing.

YouTube prankster JoeySalads is under fire for a “social experiment” video about reactions to a supposed “radical Islamic terrorist” versus a “radical Christian terrorist.” It’s a jarring setup, and the clip was posted to YouTube one day after the Orlando shooting on Monday.

In the short sketch, JoeySalads (real name Joe Saladino) and another man drop small, metal boxes near unsuspecting pedestrians. Saladino’s friend is dressed in traditional Islamic attire and yells “Allahu akbar” before running away, which translates to “God is good.” Saladino is dressed in a shirt and jeans, and yells “Praise Jesus” while doing the same action. The stunt has caused outrage from fellow YouTubers.

Notice all the Big youtubers that had somethin to say about my new video never interviewed me to defend my claim, let alone speak to me 1on1

Many of my youtuber friends, support my videos, but are afraid to come out and express that thought, I dont blame them

Saladino, who has 1.2 million subscribers, addressed the backlash in an annotation before the video begins to play.

“Due to hate, I will be donating the money this video makes to the victims and the families of the Orlando Shooting,” reads the first annotation. “Seems people are disliking before understanding the concept of this video This video shouldn’t offend anyone, it simply opens up a dialogue to a tragedy, This video will raise questions to why certain things happen, watch the WHOLE video to understand.”

He also posted several follow-up videos on his vlogging channel. He explains that he had the video made for over a month, but it was currently a relevant topic and that’s why he released it this week.

He then followed up with a video and tweets talking about being attacked, and that his personal information is now out on the internet.

I dont even know if I could do this anymore.

Social experiment YouTube videos have come under fire from the general YouTube community and general public for their tactics in recent years. They’ve been called out for shock-value marketing, and dishonest premises that often rely on paid actors to get desired reactions.

Main offenders like Sam Pepper, who posted videos showing him allegedly sexually assaulting strangers and pranking one friend to believe another had been killed in front of him, have admitted gags were staged in attempts to get views.

Saladino responded to the Daily Dot’s inquiry via email. The text of his email is below.

On facebook the video didnt have as negative as a reaction
On youtube it was negative because many popular youtubers too offense to it
And their fans just followed the wave,
Many muslims were messaging me saying the video was great because all it did was show
How ppl are afraid of islam and not any christianity
When it comes to terror
But man ppl were nit picking the video saying oh u did it too soon after the mass shooting
Or your wearing cultural clothes Muslims dont wear that or you pronounced allah akbar wrong
None of that is even the problem, ppl in america see someone wearing that clothes and either think
Muslim or terrorist
My video showed that, and all it did was open up questions saying “why do u think this is like this”
Many ppl say its cause islam performs many terror attacks
Others say, its cause the media makes us believe that
Thats all it was suppose to do the video
And i posted it after the mass shooting because it is now a topic for discussion.