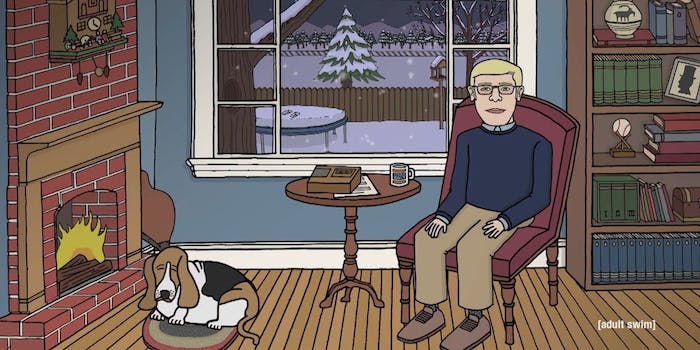 Also find out the world's 90th most popular dog name.

Years ago, lying in bed unable to sleep, a framed picture fell on my head, knocking me out cold. Effective, sure, but hardly the gentle passage into slumber that my unsuspecting temple desired.

More relaxing is Joe Pera Talks You to Sleep, an animated short with a weeklong residency in Adult Swim’s 4am slot. Comedian Pera—whom you may recall from his MTV webseries The Pancake Breakfast Critic and his two-hander with Connor O’Malley, How to Make it in USA—joins us fireside with dog Gus, to help you get your snore on.

It’s classic Pera, a soporific, stream-of-consciousness ramble that makes you appreciate just how much better To the Lighthouse would have been had Woolf played it for laughs. He explores the relationship between sheds and barns, considers the Buffalo Bills, puts Stephen Hawking’s infidelities in perspective, and wonders whether Bernie Madoff knows that we’re thinking about him.

If you’re still awake after the episode—available on YouTube for those somnolent souls otherwise engaged at 4am—there’s plenty of other excellent pieces of Pera to pore over. Check out his series with Nathan Min, The Perfect Week and its animated “spin-off” Maui Animals.