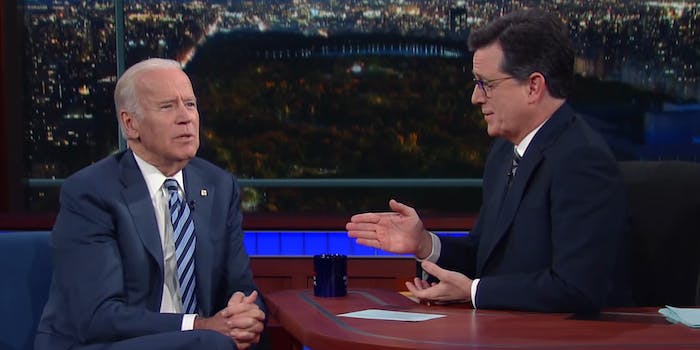 He's a great believer in fate.

The 2020 race was jump-started earlier this week after Vice President Joe Biden jokingly announced his plans to run in the next presidential election. But now he’s clarifying his comments—sort of.

After mulling it over for months, Biden ultimately decided not to put his hat in the ring in the 2016 election following the death of his son Beau, citing that the window of time he needed to run a realistic campaign had closed. As he sat with Stephen Colbert more than a year after their last emotional conversation on The Late Show—and after the election of Donald Trump—he said he didn’t regret his decision.

“Do I think I was best prepared at this moment to lead the country? I did,” Biden said, who felt the greatest issues arising were in his wheelhouse. “But I don’t regret the actual decision. The decision was the right decision for me to have made. And by the way, I learned, you want to become the most popular guy in America? Announce you’re not running. Who knows what might have happened had I run?”

Colbert then brought up the comments Biden made on Capitol Hill about a potential 2020 run. “I don’t plan on running again, but to say you know what’s going to happen in four years I just think is not rational,” Biden said. “I can’t see the circumstance in which I’d run, but what I learned a long time ago, Stephen, is to never say never. You never know what’s going to happen. Hell, Donald Trump’s going to be 74. I’ll be 77, in better shape. I mean, what the hell?”

He reiterated after taking a dig at Trump, “I have no plans, but I’m gonna stay deeply, deeply involved.”

While he might not run, he’s still more than willing to give the nation a pep talk. And given the November we’ve had, we really needed this one.

“It happens to every family, but I’m telling you, this terrible feeling you’re having right now, it’s not permanent,” Biden said in ultimate comfort mode. “It’ll be over in four years, maybe eight.”