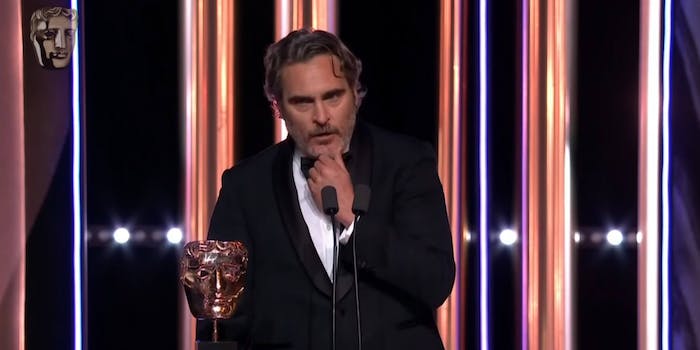 Joaquin Phoenix will likely win an Oscar for 'Joker,' so he's using his platform to address the 'system.'

Joaquin Phoenix picked up another award for his performance in Joker on Sunday night, at the British Academy of Film and Television Arts (BAFTA) awards. But he used his acceptance speech to call out the whiteness of the awards show, and he put the responsibility on the people who benefit from systems of oppression to “dismantle” them.

“I think we send a very clear message to people of color that you’re not welcome here,” he said, adding that this wasn’t a “self-righteous condemnation, because I’m ashamed to say that I’m part of the problem. I have not done everything in my power to ensure that the sets I work on are inclusive.”

During the awards, the hashtag #BaftaSoWhite circulated, echoing the #OscarsSoWhite hashtag. Prince William, president of the BAFTAs, gave a speech calling for more diversity in film, though he was called out for the Royal Family’s treatment of Meghan Markle. When the nominees were announced in early January, the backlash was immediate.

Rebel Wilson made sure to point out that only men were nominated in the best director category. Directors Lulu Wang (The Farewell) and Alma Har’el (Honey Boy), thanked Phoenix for his comments.

An uncomfortable silence filled the hall for a long noticeable moment. Thank you Joaquin.

The Oscar campaign for Joker, which includes an effusive six-page Variety spread that uses a Gandhi quote, has pretty much ensured that Phoenix will win for best actor, which might be why he’s decided to use the platform in a more useful way.