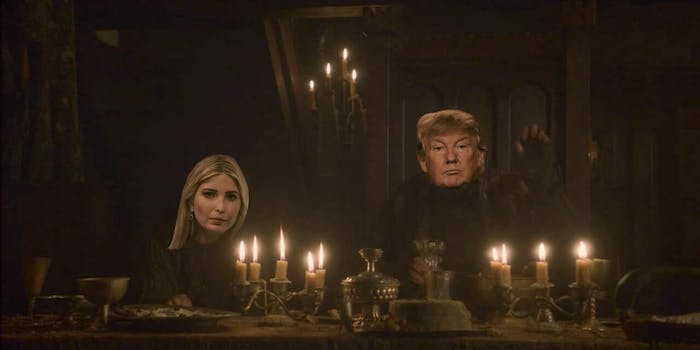 ‘The White House sends their regards.’

Jimmy Kimmel compared the Trump administration to Game of Thrones last night with a Westeros-inspired reimagining of Trump’s recent luncheon with television anchors.

The luncheon was off the record, although many were able to report Trump’s claim that appointing a special counsel to investigate alleged connections between his campaign and Russia “hurts our country terribly.” That didn’t stop Kimmel from showing what he called “exclusive” footage of the luncheon, which was basically the Red Wedding with different faces. And it’s just as brutal as Jake Tapper, Rachel Maddow, and Anderson Cooper are among the fallen.

“Uh wow, only Tucker Carlson survived,” Kimmel quipped. “Tune in next season to see how it all turns out.”