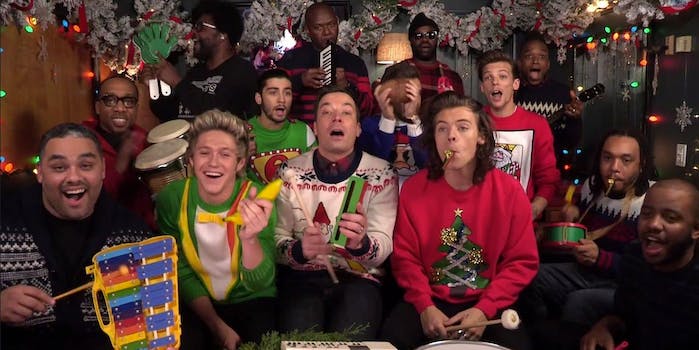 One Direction and Jimmy Fallon grant your Christmas music wish

For One Direction fans, Christmas has come early.

Sadly, we don’t mean that Larry Stylinson sent out an adorable Christmas card professing their love for one another. Instead, 1D fans will have to settle for the next best thing. During a stop at The Tonight Show Starring Jimmy Fallon, Harry, Liam, Zayn, Niall, and Louis donned some adorable gay apparel and partook in one of Fallon’s beloved classroom instrument sing-alongs.

With the help of The Roots, a banana shaker, and some mean triangle playing from Zayn, these lovable Brits turned “Santa Claus is Coming to Town” into a cacophony of Christmas cheer.

Sorry Idina, but One Direction just melted your  classroom instrument version of “Let It Go” with their cuteness.