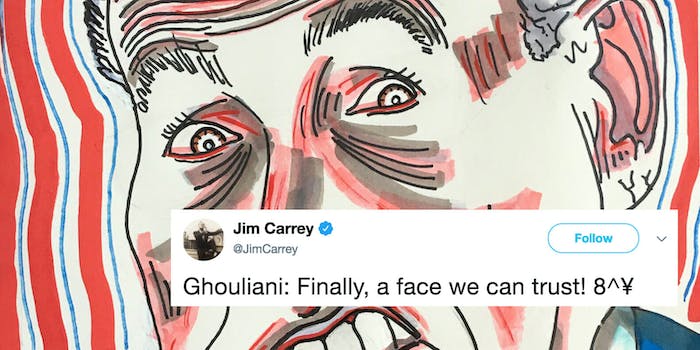 'Ghouliani: Finally, a face we can trust.'

Giuliani confirmed he was joining the squad on Thursday and said he plans to focus on working with special counsel Robert Mueller in his Russia probe to help bring everything to a conclusion. Judging by Carrey’s painting of ‘Ghouliani,’ the actor doesn’t approve of the announcement.

Carrey’s paintings in recent weeks appear to primarily focus on politics, whereas they used to focus on more abstract ideas. In the just the past week, Carrey’s art has made comments about John Bolton and Syria, Sean Hannity, and Michael Cohen.

“Bombing Syria should interrupt the news cycle for a day or two, Mr. President. Moscow has agreed to act like they’re upset. We’ll call it: OPERATION DESERT STORMY DANIELS.” pic.twitter.com/fckMwetIes

Is there a short bus to take "all the best people" to prison? ;^P pic.twitter.com/ooHaGvZqFZ

Did anyone watch 60 minutes last night? Hell of a piece about a poor kid from Greece named Giannis Antetokounmpo who’s making it big in the NBA. America still has some magic. Pity you have to wade through so much cultural sewage to find it. ;^} pic.twitter.com/H4BTPcw8bu

In March, folks on Twitter criticized Carrey for a painting he made of press secretary Sarah Huckabee Sanders, in which he mocked her for being a “so-called Christian whose only purpose in life is to lie for the wicked.”