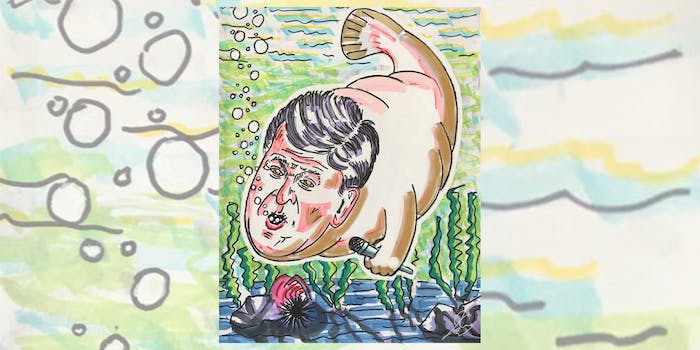 Dude is on a roll.

Having established himself as a prolific illustrator, Jim Carrey on Tuesday showed that he’s also apparently quick on the draw. As beleaguered cable host Sean Hannity faces the professional crisis that comes with being outed as a client of President Donald Trump‘s lawyer Michael Cohen, Carrey jumped into action and reimagined the conservative pundit as a water-dwelling mammal.

Hannity had not disclosed his relationship with Cohen, so when the lawyer’s offices were raided by the FBI on April 9, Hannity’s subsequent criticisms about the investigation should have been offered with a disclosure. Even on his own show, Hannity was criticized for not doing so.

“I really think you should have disclosed your relationship with Cohen when you talked about him on this show,” legal expert Alan Dershowitz said Monday night on Hannity.

This isn’t the first time Carrey has illustrated the right-wing host. Earlier this month he imagined Hannity as a pro wrestler, writing: “If u believe wrestling is real u may even believe Fox news, Info Wars and the robotic drones on Sinclair Broadcasting. But wrestling doesn’t harm viewers. Performers like Sean Hannity and Alex Jones should join the WWE where their hyperbole will do less damage to the culture.”

If u believe wrestling is real u may even believe Fox news, Info Wars and the robotic drones on Sinclair Broadcasting. But wrestling doesn’t harm viewers. Performers like Sean Hannity and Alex Jones should join the WWE where their hyperbole will do less damage to the culture. pic.twitter.com/HHsfvRaToJ

In recent weeks, Carrey has illustrated Trump, Sarah Huckabee Sanders, Scott Pruitt, Mark Zuckerberg, Steve Bannon, and John Bolton. He insinuated in another drawing that the recent fire at Trump Tower was done to burn evidence in Special Counsel Robert Mueller’s investigation and that Russian President Vladimir Putin is colluding with Trump in Syria.

But most affectingly, Carrey homaged the recent passing of friend and mentor Mitzi Shore.

The great Mitzi Shore, owner of the famous Comedy Store, has passed away. No words can express the gratitude I have for her. We met in 1979. She opened the door to my dreams! If she loved you, you did well. If she didn’t, you did something else. I will love her forever. ;^) pic.twitter.com/lBNXnW0mEr

Carrey’s work takes on-the-nose political paranoia from everyday Americans and brings it to life with bright hues and high concepts. On a Twitter timeline that grows more toxic and divided by the day, the comic’s renderings are a welcome respite.