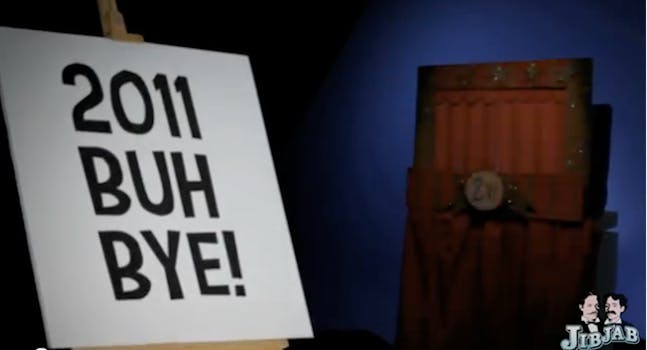 This clever video will keep you on the edge of your seat—for nearly three minutes.

Forget about reading those long newspaper tomes about the year’s hottest news events.

Instead, you can watch a 2:14 minute video by longtime digital media company JibJab, known for its political sendoffs such as This Land from the 2004 elections.

The video, which debuted on NBC’s “The Tonight Show with Jay Leno” Tuesday night, has the makings of another hit: music, politics, mega celebrities and JibJab’s trademark Monty Python-style animation.

“We’re thrilled to announce our 7th annual Year in Review video featuring a popsicle stick puppet chorus singing about all the madness that transpired in 2011,” JibJab co-founder, Gregg Spiridellis told the Daily Dot in an email. “From Charlie Sheen’s #winning tweets to the debt ceiling crisis and global protests, there was no shortage of material for this year’s video!”