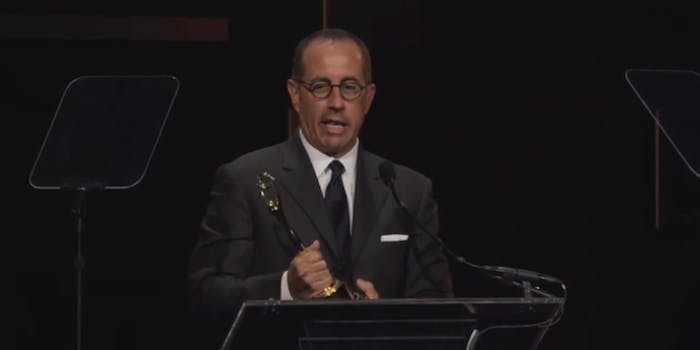 “I love advertising because I love lying.”

On Wednesday night, Jerry Seinfeld won a Clio, a prestigious award given to those who excel in the field of advertising. After offering the requisite thank yous, he explained, “I love advertising because I love lying.”

What followed is four minutes in which Seinfeld breaks down the world of advertising to its basic instincts, saying, “We are a hopeful species. Stupid but hopeful. But we’re happy in that moment between the commercial and the purchase. And I think spending your life trying to dupe innocent people out of hard-won earnings to buy useless, low-quality, misrepresented items and services is an excellent use of your energy.”

Seinfeld was taking shots at himself, too: He’s been shilling for Acura as part of his Comedians in Cars Getting Coffee series. But he did point out the more soul-sucking aspects of modern advertising and make us question our existence, so there’s that.

“If your things don’t make you happy,” he explained, “you’re not getting the right things.”