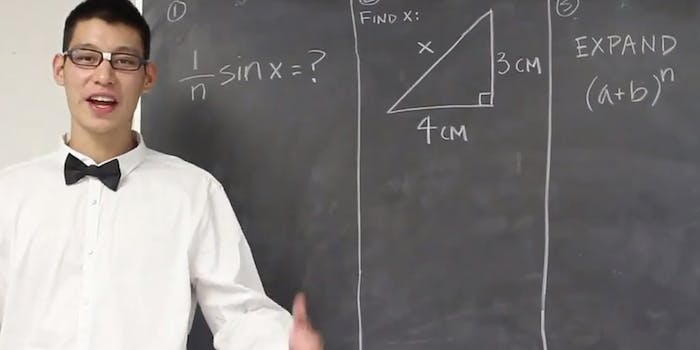 Jeremy Lin tells you “How to Get into Harvard”

After three straight breakout performances with the New York Knicks, Jeremy Lin's 2011 tutorial is catching a second wind on YouTube.

Back in Nov. 2011, when the point guard played for the Golden State Warriors, Lin mostly sat on the bench. (In fact, he was cut a month later.) In his spare time, he made “How to Get into Harvard,” a five-step tutorial video on YouTube.

“Step 1, get glasses,” jokes Lin at the beginning of the tutorial. “If you already have glasses, get bigger glasses.”

It did well, quickly plateauing at around 400,000 views. After three straight breakout performances with the Knicks, however, the video is receiving a second life, as well, and has been an additional almost 150,000 times since Lin first grabbed the spotlight on Sunday.

It’s a testament to Lin’s dorky charm that he makes the process of getting into one of America’s most selective schools seem not even a little bit elite. The video doesn’t even focus that much on basketball. It follows him as he tries on glasses, fails at math problems, and plays video games.

This isn’t Lin’s only charming YouTube appearance. Another video shows him playing flag football with friends, and news reports recently surfaced that he still sleeps on his brother’s couch.

But this one comes with an inspiring message too:

“If I can go back into high school, I would only change one thing. I still make sure I gave my best effort, but I would worry a lot less. And I would enjoy that experience of those four years of high school, because they really do fly by.

Even when I got rejected from Stanford, I was pretty disappointed and crushed because that was my dream school, but looking back, I realize God had a perfect plan for me and everything worked out the was it was supposed to.”