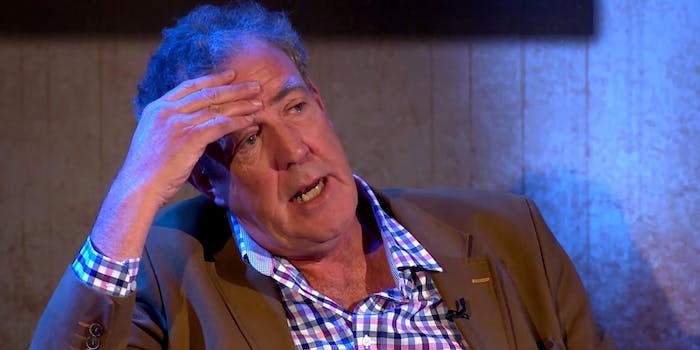 Jeremy Clarkson has been let go by the BBC following an altercation with a producer.

Jeremy Clarkson, the oft controversial yet entertaining presenter of  “the most widely watched factual TV show in the world,” will not be getting his contract renewed as host of Top Gear, according to BBC director general Tony Hall after a “fracas” with producer Oisin Tymon got physical.

While filming earlier this month, Clarkson threw a fit over not having a hot meal waiting for him at the hotel, and his confrontation with Tymon came to blows. Though he’s long been a controversial character on the BBC, Clarkson’s prior offenses of using racist slurs and poking fun at Argentina via a license plate were never enough to give him the boot. After 22 seasons and one too many battles, it seems the BBC has had enough.

Hall issued a statement on the decision, saying, “There cannot be one rule for one and one rule for another dictated by either rank, or public relations and commercial considerations.”

As of publication, Clarkson’s Twitter bio reads that he “used to be a presenter on the BBC2 motoring show, Top Gear,” and the last update he has given fans was quite a few hours ago.

Just to keep everyone up to date, I haven't heard a thing.

Many are wondering if Clarkson will be back to finish up series 22. Not renewing a contract isn’t the same as being fired.

Sky News was also able to ambush Top Gear copresenter James May and get his thoughts on the whole ordeal.

It looks like May could also be out of a job, as he said in the interview that he “very desperately [had] to write the eBay listing for my Ferrari.”

May has also updated his Twitter profile to read “Former TV presenter only remembered for saying ‘Oh cock’. Or was that the other bloke?” In the interview above, he suggested that Top Gear would still continue to exist—“it existed before us”—but that the “three of us as a package” (that’s including cohost Richard Hammond) “works for very complicated reasons, that a lot of people don’t fully understand.”

According to May, “as much as I think he’s a knob, I quite like working with Jeremy.”

Hammond has been much quieter during Clarkson’s controversy, but so far has only tweeted the following:

Gutted at such a sad end to an era. We're all three of us idiots in our different ways but it's been an incredible ride together.

Although the three presenters have been relatively calm throughout the entire ordeal, their fans have been far more vocal. There is currently an online petition demanding the reinstatement of Clarkson which has over 1 million signatures. A man dressed up as The Stig, a silent helmeted character on the show, drove up in a tank to present the petition at the BBC offices earlier this week.

Now that it’s official, fans on Twitter are pretty upset, to say the least.

Boycott Top Gear if they replace the presenters

And that's the end of Top Gear. End of an era. End of my favourite TV show of all time. Sad day.

That anger and sadness pales in comparison to the barrage of hate producer Oisin Tymon is receiving on Twitter.

@BBC_TopGear Oisin Tymon is a complete pussy bitch, he went to a&e cause of a burst lip. Grow a set of balls u stupid dog dick licking bitch

Clarkson should have killed you Oisin Tymon, filthy bastard.

Tymon has just spoken out and issued the following statement:

“I respect Lord Hall’s detailed findings and I am grateful to the BBC for their thorough and swift investigation into this very regrettable incident, against a background of intense media interest and speculation.

“I’ve worked on Top Gear for almost a decade, a programme I love.

“Over that time Jeremy and I had a positive and successful working relationship, making some landmark projects together. He is a unique talent and I am well aware that many will be sorry his involvement in the show should end in this way.”

This still leaves many wondering what the future will be for Top Gear, and what the shows presenters will move on to next.

It seems to be the most logical avenue, as the show has found great success on the streaming service.

It really is quite sad to see Clarkson go out like this. Here’s hoping Clarkson can find some redemption, take some anger management, and begin a new avenue to talk about cars.

Update 2:30pm CT: This article has been updated to provide additional clarity surrounding the original confrontation between Clarkson and Tymon.