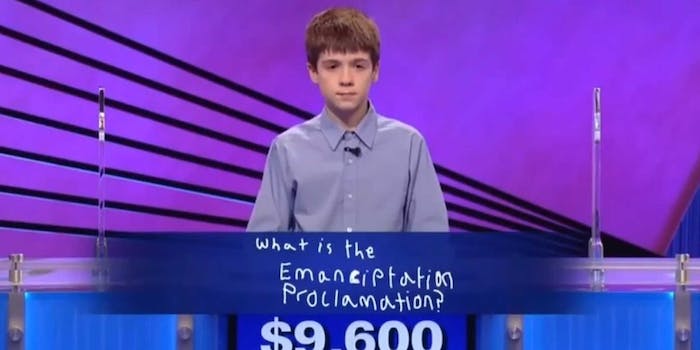 Lots of fans are miffed—not just at the slight, but at how Trebek treated the young contestant.

“What is the game show Jeopardy! currently facing?”

Correct. You win the Daily Double and control of the board.

Producers of the hit television game show—and Alex Trebek himself—are under pressure to apologize to a young contestant after he lost a recent “Kids’ Week” matchup on a technicality.

You’ve probably seen the video. Deadspin called it “the most heartbreaking wrong answer ever.” Thomas Hurley III correctly answers the clue “Abraham Lincoln called this document, which took effect in 1863, ‘a fit and necessary war measure.'” But his answer is disqualified when he adds an extra t to “Emancipation.”

“Because you misspelled it badly … the judges are ruling against you,” Trebek says, alerting Hurley that the blunder would cost him his $3,000 wager.

Lots of fans are miffed—not just at the slight, but at how Trebek treated the young contestant. The Jeopardy! Facebook page has been flooded with over 1,200 comments since the video of Hornback’s victory—with Hurley’s loss edited out—was posted July 31.

Funny but Alex can’t even read the answers correctly! Ask him how to pronounce INXS. He pronounces it like ‘inks’. And thats not the only word he cannot read. Lol. So lets talk about spelling AND pronunciation! Get it right Alex, and quit picking on little kids!

You cannot tell the adults, in final Jeopardy, that they won’t be penalized for spelling… and the penalize a child for doing so. THAT is why so many are angry. He was cheated! I sure hope they make it up to him. I really do.

Other Facebook users sided with the program’s decision, reminding fellow users that Jeopardy! is a show that tests merit and intellect—something that a misspelled word does not illustrate.

The child misspelled the word. Rules are in place for a reason. Now, because this kid is whining and claiming he was cheated, the stellar achievement of the boy who did win is being overshadowed. How sad. Thomas’ parents do him no favors if they do not teach him to lose gracefully.

I am sure a lawyer is licking his chops right now. Rather than teach kids about failure, lets blame someone else. Spell it right next time.

Neither Trebek nor other Jeopardy! representatives have publicly commented on the segment.