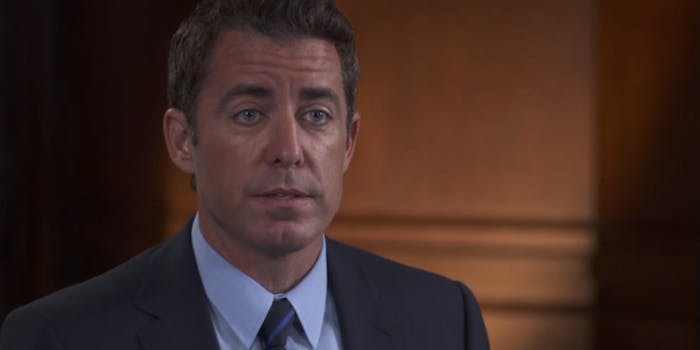 Plus the 5 best Jason Jones segments.

Daily Show correspondent Jason Jones is leaving Comedy Central for TBS. This after almost a decade of fake news reporting, and just shortly after his boss Jon Stewart announced his retirement from the show.

That said, I am ecstatic to announce that I’m about to make another great show over @tbsveryfunny

According to Rolling Stone, Jones is leaving thanks to a 10-episode order on TBS for a comedy about a family that embarks on a wacky roadtrip to Florida. Jones’ wife, fellow correspondent Samantha Bee, will also work on the project, although she’s made no formal announcement about leaving The Daily Show to do so. The pair of Jones and Bee were much-touted candidates to take over Stewart’s hosting duties.
In celebration of Jones’ nearly 10 years on the show, we’ve highlighted five of his best moments over the years.

The Native Americans vs. The Washington Football Team

This segment caused an uproar before it even aired, with the Washington fans calling foul that the Daily Show producers never told them about having to meet the Native American activists face-to-face. Directly before airing the piece Stewart said, “If we find out that someone in a piece was intentionally misled, or if their comments were intentionally misrepresented, we do not air that piece.” The piece aired, the rest is history.

The segment that inspired Rosewater

Before Stewart embarked on his filmmaking career, Jones went to Iran and interviewed BBC journalist Maziar Bahari. During his imprisonment, his appearance with Jones was used against him interrogation, as evidence of him working with American spies. Much was set in motion by Jones’ coverage in the country.

The ‘Real Americans’ of Wasilla

When Sarah Palin dubbed Wasilla, Alaska, the “real America,” Jones went there to pull back the curtains on what that really means. That meant uncovering NSFW tattoos on church-going folks and asking the current mayor to explain how doing her job prepared her to be the President of the United States.

During the government shutdown of 2013, Jones enlisted a former Federal Bureau of Investigation hostage negotiator to try and talk sense into the Republicans at the time. This resulted in Jones with a bullhorn, clad in a bulletproof vest, with the negotiator in his ear coaching him along. When the Republican strategist says Obamacare will be the worst thing in American history, Jones can’t hold back from screaming, “Do you remember fucking slavery?” Even the FBI negotiator gives up.

During the Winter Olympic Games in 2014 gay rights were a big topic, and so Jones traveled across the world and talked with Russians about the climate there. What he found was they weren’t so different from America, if you’re talking about America of the ’70s. They compared gay rights to having sex with tables. This clip also includes the best use ever of a quote from Joss Whedon’s Angel.