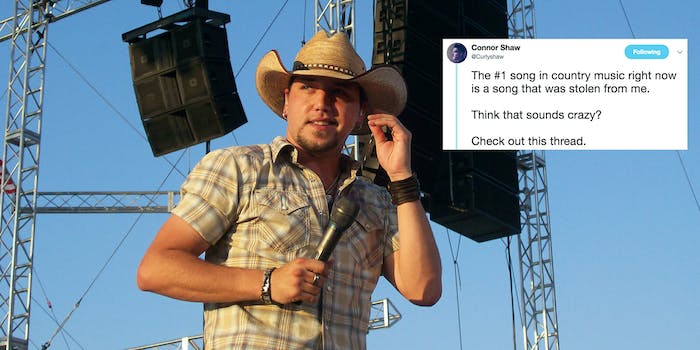 On Twitter, a compelling case from an aspiring songwriter.

Canadian musician Connor Shaw made a compelling argument on Twitter this month that he wrote the No. 1 song in country music—but it was stolen by Jason Aldean.

The #1 song in country music right now is a song that was stolen from me.

Check out this thread.

The singer hailing from Edmonton, Canada, said he wrote a song called, “Easy,” in 2015 in a music class, and when it was received well by his peers he posted the song to YouTube. Now, he believes it was ripped off by Jason Aldean, members of the Florida Georgia Line, and Morgan Wallen to create “You Make It Easy,” which debuted in February 2018.

In a series of tweets, Shaw explains that after he shared his song online in 2015, a family friend reached out to him in 2017 for demos that she could send around in the U.S. Then, in February 2018 he heard Aldean’s song and was struck by how similar it sounded to his own.

“I thought, ‘Hmm, that’s funny. My song uses that as the hook for the chorus, I wonder what this sounds like,’” he tweeted. “After listening for the first minute of the song I came to the shocking realization that ‘You Make It Easy’ uses the same hook and melody as my song.”

This particular song ended up being quite well-received by the instructor in one of my songwriting courses, so I chose to post the song online (YouTube, Facebook, SoundCloud, etc.)

You can find it here: https://t.co/nEmjMRpqs2

My song was by no means well recorded or even finished by my personal standards, but it was something I could post online for the enjoyment of my friends and family.

Cut to a year later.

I received a message on Facebook from a family friend who is also a singer/songwriter from Nashville.

She says she’s seen my posts on Facebook and she loves my music. She then asks me to send her any demos I might have so she can send them around.

The song I sent was “Easy” pic.twitter.com/SLVLfOhw1H

We had that exchange in October of 2017.

All is quiet for a few months.

I thought “Hmm, that’s funny. My song uses that as the hook for the chorus, I wonder what this sounds like”

After listening for the first minute of the song I came to the shocking realization that “You Make It Easy” uses the same hook and melody as my song.

Shaw even provides a side-by-side comparison of the two tracks, as well as a breakdown of how the two songs compare lyrically. He also did a lot of research about how Aldean’s song came to fruition.

For those of you wanting a side-by-side comparison, here is a video I made within MINUTES of listening to his song. pic.twitter.com/3mmJsKlu0J

After listening to the song over and over again, I started to notice a striking number of lyrical similarities as well.

In short: the musical structure, lyrical content, and instrumentation used in his song are in a lot of ways identical to what is featured in my song.

Here’s a little musical breakdown I made of the hook(s) for you Music folks. pic.twitter.com/OfwN6QR3jP

I did an incredible amount of digging on this song to try and understand how this happened.

Throughout different interviews he outlines the fact that the song was “written” some time in January by the members of FGL and was given to him at his request.

Here’s an interview of him talking about it’s origin:https://t.co/AaTF80ZCLo

Shaw said he was approached by a Canadian entertainment lawyer who helped him prepare a cease-and-desist letter, which was sent to Florida Georgia Line’s lawyer. While Shaw did not include the exchange between the two letters in his thread, the documents were uploaded to Scribd and reported as factual by Global News.

After sharing some concerns on my personal Facebook I was eventually put in touch with a Canadian entertainment lawyer who did his best to help my find a case in this situation.

We put together a compelling argument and sent a cease and desist to the lawyer of Florida Georgia Line. (I won’t post any of our exchanges because I’d be walking on eggshells)

Essentially their lawyer responded with a long-winded and incredibly condescending letter informing us that no matter what we did we would never have enough money to out-lawyer their team. (They strong-armed me by calling out my financial situation).

Florida Georgia Line’s lawyer, Jess L. Rosen, responded to the cease-and-desist and said it was “entirely devoid of merit.” He specifically cited the accusation that the song lyrics were similar and said if you do a Google search, over 700 songs use similar lyrics.

With regard to the music, Rosen said the analysis should be left to musicologists and that the fact that Shaw and his lawyer did not have an official analysis done proves that they didn’t truly see any striking similarities.

Lastly, Rosen said it was absolutely impossible that his clients know Shaw or anyone in relation to him, and the fact that Shaw’s YouTube recording has a mere 203 views proves that it’s unlikely that Florida Georgia Line stumbled across the song. (“Easy” now has 16,000 views on YouTube.)

Shaw has stuck to his theory and compared himself to David in the biblical tale of David vs. Goliath, except in his version Goliath wins.

“I’m almost certain that I sound crazy,” he tweeted. “I just can’t shake this feeling that my song was taken from me and I can’t do anything about it. In 2018, David gets his ass kicked by Goliath.”

Beyond that their isn’t much I can do other than watch the song I wrote gain an unbelievable amount of popularity.

And for those wondering, I did reach out to my family friend to ask who she sent the song to and she wouldn’t tell me. (Sketchy, right?)

I’m almost certain that I sound crazy. I just can’t shake this feeling that my song was taken from me and I can’t do anything about it. In 2018, David gets his ass kicked by Goliath.

I’m sure I missed a bunch of details, but it’s late and I’m tired, so I hope you found this as interesting as I find it infuriating.

Shaw did not respond to a request for comment.

Folks on Twitter don’t really seem to buy his argument.

The song isn’t that good man. Move on.

With all due respect, I feel like you’re reaching man :/

You are ridiculous and so is this argument.

Could you be reaching anymore? Dragging @Jason_Aldean into this to try & make yourself famous is just sad

You act like you’re the first person to write about Easy & Sunday mornings…The Commodores 1977?

Get over yourself man!

Some folks believe him, however, and have even created a GoFundMe to raise money for him to get a better lawyer. As of press time, it had raised $785 out of the $2,000 it hopes to raise.