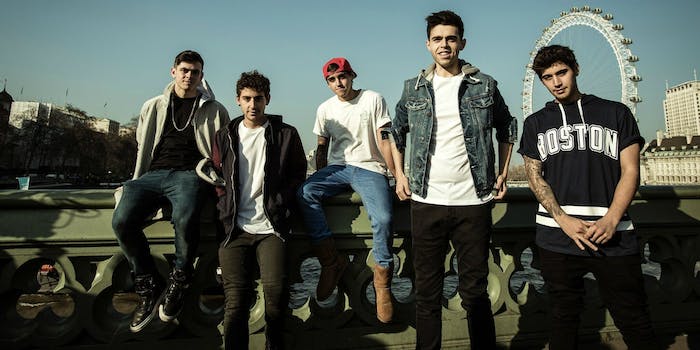 The ‘Untold and Untrue’ story of the Janoskians, YouTube’s sweetest pranksters

The Janoskians are redefining boy bands for the YouTube generation.

Within seconds of sitting down to lunch with the Janoskians, three of the five members of the YouTube group take off their shirts.

It’s a warm day in Los Angeles and there’s a pool nearby, but we’re still clearly in the bounds of a restaurant. These guys obviously value comfort above all else, and as the Janoskians, they’ve made a career out of ignoring societal conventions for fun and profit.

The Janoskians (that’s: Just Another Name of Silly Kids In Another Nation) are redefining boy bands for the YouTube generation. The fivesome from Australia—twins Luke and Jai Brooks, their elder brother Beau, and friends James Yammouni and Daniel Sahyounie—started posting their prank and social experiment videos to the platform in 2011 and built a loyal following that now includes over 2 million subscribers to their main channel.

They’re about to go on tour, and citing concerns for staying in shape, Daniel and Beau both order salads (but then sneak fries from my plate, with permission). The rest of the boys opt for carbs with me—burgers and pizzas. They’re playful but exceedingly more reserved than their YouTube channel would lead you to believe. They’re polite, they don’t talk over one another or get into any mischief during the meal, and they actually ask me detailed questions about my career. It’s a far cry from the YouTube image of them pepper spraying each other and drunkenly rolling down hills.

This is the last break they’ll have for a few weeks. In addition to prepping for an international tour, they’ll attend the Teen Choice Awards clad primarily in body-paint tuxedos and then launch their first film, Janoskians: Untold and Untrue.

It’s a far cry from the YouTube image of them pepper spraying each other and drunkenly rolling down hills.

“We’ve always loved entertaining, whether it’s music or YouTube videos or a TV show,” Beau explains. “We thought a movie was a good way to express ourselves.”

The film, available for download and on-demand viewing Aug. 28, began as a traditional documentary, in line with the likes of Justin Bieber’s Never Say Never or One Direction’s This Is Us. But in a fitting twist, the guys tweaked the script, revamping it as a mockumentary that both celebrates and pokes fun at their success.

“There’s so many boy bands who’ve done what they’ve done; let’s sort of make a mock of boy bands,” Beau recalls thinking. “It’s a fine line between knowing what’s real in the movie and what’s not.”

Putting themselves out there

Janoskians exist in a sort of in-between space between YouTube celebrities and a band. Their rise as a group was a combination of two standout videos. The first, “Awkward Train Situations,” featured them being awkward on public transit. Another, where they answer a dare from The Ellen DeGeneres Show and danced behind unsuspecting people, got played on the air and won them a legion of fans.

While their music—half of them play instruments—veers pop-rock, their videos fall squarely into the prank category on YouTube. A classic Janoskian prank is usually directed on another member of the group and involves some level of pain. For example, the guys, on their Dare Sundays channel, have acted like a human dartboard and eaten insects.

Their videos only occasionally border on “social experiments,” where a YouTuber goes out into the public and does something aimed at getting a reaction from those around them. They’re quick to draw a distinction between their segments, which rely on public disturbance and shock—like engaging in awkward phone conversations in public spaces—and other practitioners of the genre, like Sam Pepper, who faced backlash for sexual harassing unsuspecting girls, pinching them on their behinds and recording their reactions.

Janoskians exist in a sort of in-between space between YouTube celebrities and a band.

The Janoskians aren’t phased by any negative comments they get, but they are quick to point out that they try to stay in the realm of making fools of themselves, not other people.

“We don’t do [pranks] on the daily,” Luke says. “We sort of do it to a more exaggerated extent, which is why some people don’t get it. They think it’s crossing a line, but it’s just another genre of comedy.”

Their pranks and gross-out humor have attracted the attention of former Jackass star Steve-O, who was a recent guest on their channel and, according to Daniel, was inspired by the group to “keep up on YouTube.”

“The majority of the stuff we do is humiliate ourselves in public,” James explains. “We don’t want to bully other people. Then you’re an idiot.”

While the Janoskians are popular in the U.S., they’re even more so in Europe. One scene in particular in Untold and Untrue captures the ferocity of their fanbase, when a spontaneous gathering in Hyde Park turns into an unscripted riot scene.

“That day was scary; the footage does not do it justice,” James recalls. “We had two security guards per person.”

Because of their self-described edginess, James says it’s hard for the group to get sponsorships to fund their channel.

“We aren’t really ones to sell out; we’re very selective,” he explains. “The brand has to give us creative control,” Beau chimes in. They recall failed attempts by marketers just trying to cash in on their audience without understanding the Janoskian way at all.

“There’s one movie we had to promote, and they wanted us to sit in a circle and make a song about it,” laughed Beau.

The Janoskians are about the furthest thing you can find on YouTube from a campfire singalong, unless the song was about puke and farts.

“We put ourselves out there,” adds Luke, circling back to the riot in Hyde Park. “A Bieber or a One Direction would not put themselves in that situation.”

A diverse crowd of young women and a few boys started camping out at 10pm the night before the Aug. 25 premiere of Janoskians: Untold and Untrue at the Bruin Theater in Los Angeles. When the group finally arrives—wearing red silk wrestling robes—the first thing they do is snap selfies with the crowd.

Inside the theater, the fans dodge security to get more snaps with YouTubers and Vine stars who’ve come out in support, from Jack and Jack, who appear in the film, to Best YouTuber Teen Choice Award winner Kian Lawley. When the film starts, it’s hard to hear much over the screaming each time one of the boys appears on screen.

The mockumentary concept definitely takes much of the crowd by surprise—and why wouldn’t it? The Janoskians, and presumably much of their audience, haven’t seen some of the seminal works in the genre on which their film is based. To them, the self parody is natural, not an homage to Christopher Guest’s Best in Show or Joaquin Phoenix’s art project I’m Still Here.

The Janoskians didn’t “go method” in their mockumentary at all; they simply worked with a script provided to them by a director and made small tweaks to their characters over the two weeks of filming.

“My character was meant to be someone who’s shy, but I changed it to someone who’s super paranoid,” explains Jai, who goes into hiding throughout the film to avoid being caught by mysterious forces.

There are murmurs in the theater when the film starts to tease Beau’s character as “a jerk when the cameras are off,” but after a few more joke sections, the crowd starts to catch on. The mockumentary concept doesn’t fully land, but that might be more of a function of a crowd that can’t keep itself totally focused, instead often darting up from their seats to follow their favorite celebs up to the lobby and bathrooms for more selfies.

The film builds around the Janoskians playing a single night at Wembley Arena in London, and leads up to a rock opera closing number, where the boys all incorporate their mockumentary personas into a big musical performance. It’s completely different from the other songs sprinkled throughout the film, and each member performs a section related to his character. It’s decidedly weird—and probably even weirder for the fans in attendance at Wembley who didn’t know it was the punchline in an elaborate mockumentary joke.

But it also has weirdly sweet moments, including the boys shouting that “all love is equal” and a bit about how fans on Twitter like to imagine Jai is dating Harry Styles (complete with a shirt featuring Jai’s own art of Styles). In the end, they spray the crowd with Super Soakers, pull their friends on stage, and promise to stay together forever.

It’s a similar scene back at the restaurant as lunch wraps up. The shirts go back on and the guys get ready to visit a pre-Teen Choice gifting suite at the hotel, clearly ready for a break at the end of a long promotional cycle. They show no signs of stopping and plan to make good on their mockumentary promise.

“Until there’s not a last fan standing,” Luke says, “then we’ll accept that it’s over.”