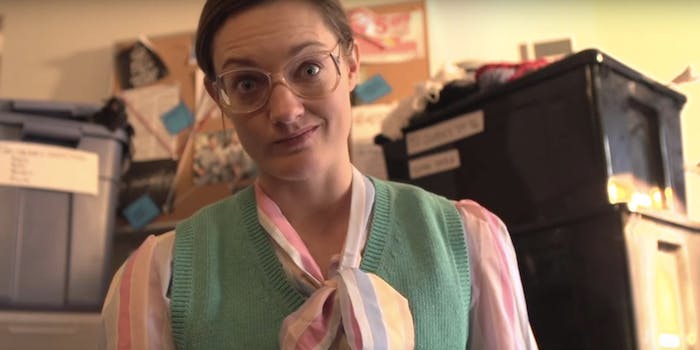 Who were these ghost hunters and humpers?

On a chilly fall day in Williamsburg, Brooklyn, I came across a flyer hanging on the bulletin board at a local bike shop. Nestled among the ads for bike tours and the panniers for sale was a single sheet of copy paper with bubbly handwritten letters: “Ghost Problems???” A phone number and Facebook address were listed, encouraging me to contact the expert: Janice Gunter, Ghost Hunter.

I don’t really believe in ghosts, but I snapped a picture of the flyer with my cell anyway. Why not?

And I wasn’t alone: Janice Gunter’s ghost hunting ads were plastered all over Brooklyn last fall. Many of the New Yorkers who saw the flyers duct-taped to the street lamps or pinned to coffee shop doors actually called the phone number for help with problematic ghosts.

Gunter, a self-taught spook sleuth from the remote, seafaring Bay Ridge neighborhood—home to so many Irish-Italian cops and firefighters—took to Facebook and YouTube to share some of the more interesting cries for help left on her voicemail. In the first month of her ghost hunting startup, Gunter’s voicemail received 259 calls from New Yorkers who stumbled upon the flyer.

One of those voicemails, from a German-sounding guy calling himself Franz Gumper the Ghost Humper, suggested that Brooklyn was teeming with rival poltergeist pursuers.

I began to wonder: Who were these ghost hunters and humpers? How long had they been here? Did they do anything besides call and leave each other funny voicemails?

As it turns out, Janice Gunter: Ghost Hunter is a new webseries, a docu-para-dramedy-sci-fi-reality show that follows Gunter and her ‘Ma’ around as they build a business from scratch. Starting with a staple gun, a Sharpie, and a dream, Gunter and her Ma travel out of Bay Ridge and to stardom, eventually ending up as contestants on America’s Next Top Ghost Hunter.

You don’t have to believe in the supernatural to find Gunter’s tinfoil-hat misadventures entertaining. It’s perfectly fine if you don’t believe in ghosts, despite the fact that one named Jerry is sitting right behind you trying to check his g(host)mail by inserting his invisible hands into yours. Maybe you ain’t afraid of no ghosts. But isn’t it better to be on the safe side, knowing that a spunky young professional is there waiting for your call?

The Daily Dot spoke with Gunter—who bears an eerie resemblance to comedic actress Elizabeth Zephyrine McDonough, a veteran of the Groundlings and Upright Citizens Brigade—in between visits to the other side.

“I’ve been seeing things since I was a little child,” said Gunter, explaining that sometimes the ability the mediate between the spirit world and the streets of Bay Ridge can skip a generation. “I would just see things that other kids didn’t see. Even playing hide and go seek, I would find someone. And the other kids would say, ‘There’s no one there.’”

Gunter decided to market her specter-seeking gifts by going door-to-door in the neighborhood, visiting the local seniors who “might not be walking around seeing the flyers.”

“When something really weird is going on, you can’t just call the police. You can’t just put handcuffs on a ghost,” Gunter said.

Not only are ghosts difficult to apprehend in a traditional law enforcement sense, Gunter believes that a special skill set is needed just to communicate with the spirits of the deceased. And it’s not because they speak ancient languages or demand that shamanic rituals or blood sacrifice be performed in order to get their attention. According to Gunter, it’s because many ghosts just aren’t very bright.

“Their brains are like 200 years old,” said Gunter. “They may not be the sharpest stick in the shed. For instance, they cannot Google something to like, solve a problem. Which is very sad. Ghosts do get lonely too. And I really feel sorry for them.”

It must be especially lonely to be a ghost in these skeptical, science-driven times: when no amount of chain-clanging and caterwauling in the world can convince the living that you’re real. For those on the fence, perhaps the simplest way to handle the possibility of ethereal neighbors is to know where and how to stay out of their way. According to Gunter, certain areas—especially very old parts of town—are basically the supernatural equivalent of the gayborhood.

“Anywhere with a lot of cobblestones, there’s a lot of ghosts. With more time, there’s more dead people,” Gunter said. “Take Wall Street, for example. There’s a lot of suits down there, and let’s just say a lot of them are stuffed.”

But this ghostbuster isn’t just finding the haunted hotspots of the city. She’s haggling, New York-style, with the spirits in order to convince them to leave people’s apartments. It can take a few visits and some negotiation, which Gunter compares to buying something on installments of $19.95 apiece.

On Facebook, where the Janice Gunter: Ghost Hunter page has close to 4,000 likes, the most commonly asked questions revolve around whether Gunter’s ghost-hunting abilities are real—and even whether Gunter herself might be some kind of elaborate character played by a professional actress. The paranormal investigator told Daily Dot she understood the skepticism, since she’s come across some imposters as well.

“Once I got on the Internet, I found out a lot of stuff I didn’t want to know,” Gunter said. “First of all there are a lot of fakes out there. There’s these psychics who sit in their house eating a sandwich while they talk to you on the video. But like the great Ghandi said, be the change you wish to see. So I never eat sandwiches on the job.”

The six-webisode series does indeed feature a sprinkling of professional actors and comedians who intersect with Gunter’s pursuit of phantoms. Two of the guest stars are familiar to fans of Orange Is the New Black: Constance Shulman (who plays OITNB’s yoga teacher) and Catherine Curtin (OITNB prison guard Wanda Bell) drop in as a Park Slope psychic and the imposing host of America’s Next Top Ghost Hunter, respectively.

Part of the cast list reads like a who’s who of LGBT comedy, with out performers like John Early, Emma Willman, Jiggly Caliente (of Rupaul’s Drag Race fame) peppering scenes. Also on deck are Twitter star Aparna Nancherla, Moth storyteller Adam Wade, and Sunita Mali, the famous dance victim from Lil Jon’s hilarious Turn Down for What video.

In one episode, Gunter comes across a flyer for a psychic development workshop and travels to the greener pastures of Park Slope (Brooklyn’s upscale granola neighborhood) to attend. Greeted by Shulman’s charismatic cult leader, the upstart ghost hunter finds herself in a circle of women balancing crystals on their faces and talking about how their spiritual transformations began after switching from coffee to Chai.

Other episodes follow Gunter into sticky exorcisms, cat possession, paranormal gay bars, and the reality show-within-reality show America’s Next Top Ghost Hunter. It’s a lot of metaphysical adventures packed into 6 episodes, and for Janice Gunter, it’s all a labor of love. Asked if her new business had turned a profit yet, Gunter told the Daily Dot: “I guess it depends on your definition of profitable.”

“If you’re talking about everyday dollars, OK, we haven’t been handed much of those,” said Gunter. “But you know, I heard that Steve Jobs he had to do a lot of free stuff just to get off the ground. So we’re in like, early Steve Jobs phase…where he was maybe in the ’80s.”

The first season of Janice Gunter: Ghost Hunter is not yet available for streaming. Fans and phantom-riddled prospective clients who want to keep up with Gunter have to stalk her Facebook page and YouTube videos, where she shares some of the entertaining voicemails that come in on the ghostline, and espouses theories about the alleged death and reanimation of Donald Trump.

But Stephanie Testa of One Glass Productions, the company that sends film crews to follow Gunter around on her supernatural sojourns, told the Daily Dot that the series is “exploring different digital platforms for the best fit” and that she expects to have an announcement soon. With an all-female Ghostbusters remake slated for summer 2016, it shouldn’t be too long before shows about chasing apparitions are all over the Internet. In the meantime, ghost hunting fans can watch the trailer.