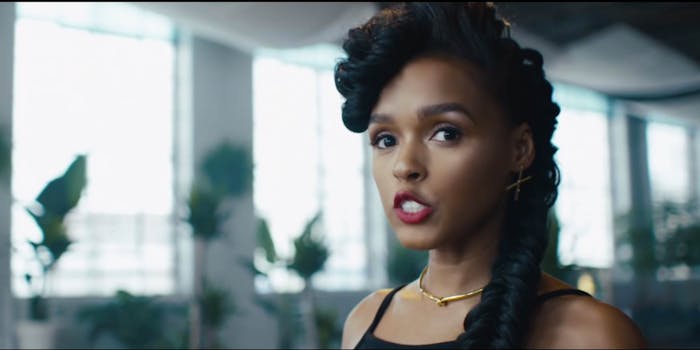 Get off her areola.

How do you handle a Twitter commenter who tells you how you should be dressing? Singer Janelle Monáe just offered the best possible example.

Yesterday, someone tweeted this at her:

girl stop being so soulful and be sexy..tired of those dumbass suits..you fine but u too damn soulful man.

Monáe’s suits were part of her persona, and as Gradient Lair pointed out in 2012, her reasoning for wearing them is powerful:

When I started my musical career I was a maid, I used to clean houses and the girls I used to clean houses with used to always beg me to sing while we cleaned. I lived in a boarding house with five other girls and I would sell my $5 CD out of my room. My mother was a proud janitor, my step-father who raised me worked at the post office, and my father was a trash man. They all wore a uniform and that’s why I wear my uniform to honor them. I have work to do. I have people to uplift. I have people to inspire. And today I wear my uniform proudly.

With that in mind, her response to the commenter was even more inspiring:

@mellow_saa sit down. I'm not for male consumption.

Monáe also just released the new video for her song “Yoga,” and a verse speaks directly to this issue of people policing women’s looks, tone, bodies, opinions: “Crown on my head but the world on my shoulder/I’m too much a rebel, never do what I’m supposed to/Bend it never break it, baby watch and I’mma show ya/Stretching on my cash, got my money doing yoga/Sometimes I’m peachy, and sometimes I’m vulgar/Even when I’m sleeping, I got one eye open/You cannot police me, so get off my areola.”

Over the weekend, Pink also took down commenters who concern-trolled her about her weight, with a lengthy response about loving her body. The commenter did later apologize to Monáe, but his remark certainly speaks to a larger issue about viewing women’s bodies as objects. Listen a little closer to what Monáe’s saying.