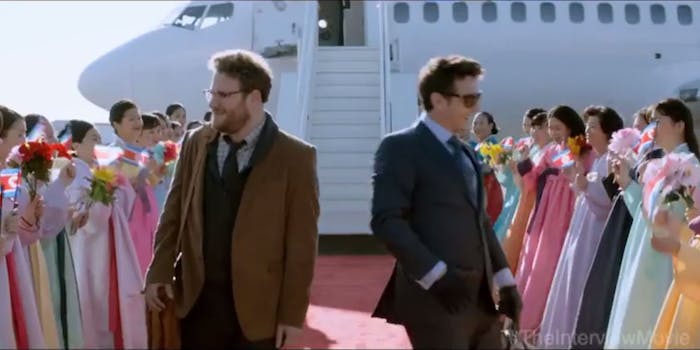 Brace yourself; the North Korean threats are coming.

Shots fired: The official trailer for The Interview has been released.

Sony Pictures released the controversial film’s official full-length trailer today. The Interview stars James Franco and Seth Rogen as tabloid journalists who are hired by the CIA to assassinate North Korean leader Kim Jong-un. From the trailer, which offers glimpses at cameo roles by Rob Lowe and celebrity chef Guy Fieri, it appears to return the frequent comedic collaborators to familiar, improvisational ground that they previously enjoyed in films like This Is the End and Pineapple Express.

However, not everyone is eagerly anticipating the film’s release. North Korea’s Korean Central News Agency deemed the film’s release an act of war (not to be confused with Franco’s film Your Highness, which was simply a declaration of war on good comedy). The statement came in response to a teaser trailer that was released in June.

If the North Korean leader makes good on his promise, the first wave of attacks will come on Dec. 25.