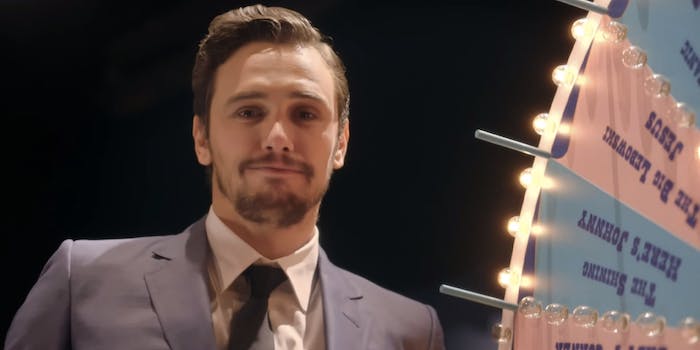 Damn it, James Franco, I hate you so much.

If it is James Franco’s ubiquity that makes him nauseating, the few, stripped-back minutes we get in each episode of his new webseries Making a Scene demonstrate just why he is a movie star.

Franco makes it very easy for people to hate him. It’s not really the fact that he is taking multiple postgraduate courses simultaneously while lecturing. Nor is it the terrible poetry that makes you doubt his self-awareness, nor the sub-average rebuttal at his undeserved Comedy Central Roast, nor the inexplicable decision to let him host the Oscars.

Rather it’s the feeling that the whole time he is doling out invisible art or unleashing Dicknose on Paris, he has absolutely no idea what he is doing. And he doesn’t—I once overheard him outside a theatre telling his acolytes that although he couldn’t understand a word of the play’s Irish brogue, it was nevertheless “amaaaaaaaazing,” whilst emanating a charisma and enthusiasm that had the rest of his crew nodding away.

And that’s why he’s a movie star and we’re just jealous nobodies. Sure, you may well write better than him. Or paint better than him. But you probably don’t look like him, and more importantly, you definitely don’t also have the unfathomable confidence to push yourself to the forefront of relevance even when you shouldn’t be.

Each episode of Making a Scene starts just how most of Franco’s “projects” probably start; Franco, surrounded by a team of people, almost prostrate, barely awake and wedged into cushions as if he has just been wheeled in after surgery.

A wheel is spun and two films or genres are selected that will then be mashed together in a scene that makes up the bulk of the episode: Dirty Dancing/Reservoir Dogs, Batman/Beetlejuice, Taxi Driver/silent films.

Franco is the object of all the action. The team talk at him, coming up with the ideas. They put his makeup on, and, one assumes, pull the script together. You’d think that with his name attached to the title, Franco would at least get out of his nest and spin the wheel, but no. He just looks way too sleepy to do that.

So it’s set up to be a trainwreck, which takes some doing in a three-minute episode. You picture the glazed-over Franco from the Oscars walking around as Jack Nicholson in The Shining waiting for it all to be over.

But when each episode switches to its titular scene, something happens; Franco comes alive. He’s suddenly bright-eyed and funny and, pivotally, entertaining. The mashups make sense and you wonder why no one else has done something like this.

Suddenly the feelings of annoyance, created by a false belief that he had been leading you toward an infuriating waste of time dissipate, now replaced by that familiar feeling of jealousy that usually accompanies thoughts of him. And we’re back to square one. Damn it, James Franco, I hate you so much.