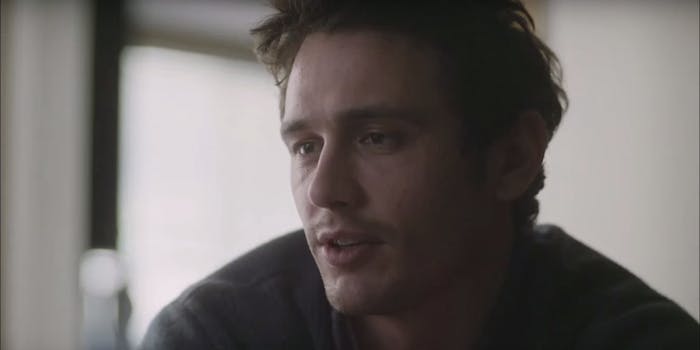 Franco and Maker’s creative odyssey is just getting started.

James Franco has been working with multichannel network Maker Studios for more than a year, and their partnership is finally beginning to bear fruit. On Dec. 21, Franco released four new webseries—two on his Facebook page, and two on his YouTube channel.

The four series were all co-developed by Franco’s Rabbit Bandini Productions and Maker Studios. The two released on Facebook both cover nonfiction topics: The first, Studio 4: Acting Competition, is a self-explanatory reality series in which students at Franco’s Studio 4 acting school compete for a role in the actor and filmmaker’s next film. The second series goes inside Studio 4, where it sits in on a masterclass Franco presented. His topic: how to shoot a perfect sex scene.

On YouTube, Franco’s work takes a more scripted tone. In The Ultimate Evil, he spins a thrilling crime tale based on the Son of Sam murders in the 1970s. The most engaging of his four new series, however, is Winesburg, a series of short films that are all set in the same town. Here’s the first episode of that series, which features Winesburg’s telegraph operator as its central figure.

Franco and Maker’s collaborative efforts were first announced at the 2014 Newfronts, which occurred more than 18 months ago. “Maker let me play in a playground of sounds stages, creative teams, technology teams and more—truly experimenting in content creation which is very rare in the entertainment industry,” said Franco. “Love them, or hate them, I’m really excited about these shows—and can’t wait for even more to come with Maker in 2016.”

The “even more” Franco refers to is a pair of shows, titled LA Series and CAMP, and a film called Tenn. Those projects will all arrive over the next year, so Franco and Maker’s creative odyssey is just getting started.