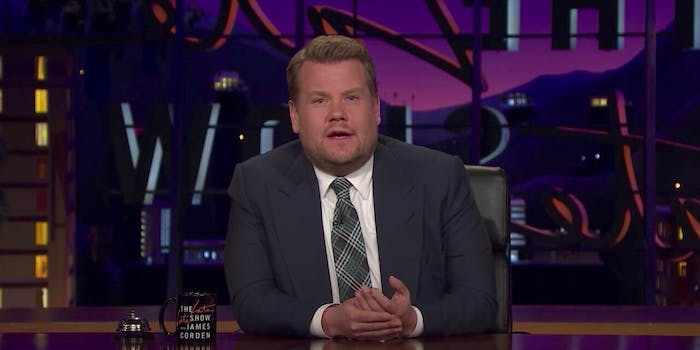 James Corden delivers heartfelt message to the people of Manchester

'It shocks me every time we hear this sort of news that attacks like this can happen.'

James Corden offered an emotional message of hope to the people of Manchester after an explosion killed 22 and injured nearly 60 at an Ariana Grande concert.

News of Monday night’s Manchester attack started coming out as Corden—who’s originally from the U.K.—taped Monday night’s episode, so he took to his desk afterwards to address it. He didn’t know much except that there had been multiple fatalities and injuries, and he started choking up as he mentioned the many young people who had been in attendance.

“It shocks me every time we hear this sort of news that attacks like this can happen, but especially when there will be so many children at this concert tonight,” Corden said.

He offered his thoughts and prayers to everyone affected by the attack, and he paid tribute to Manchester, a city that people have almost certainly heard of, even if they’ve never been there. It’s full of success stories and cultural touchstones, but he acknowledged that for all that we know, there’s something much bigger that makes the city so special.

“But when I think of Manchester, the place that I know, I think of the spirit of the people there,” Corden said. “And I’m telling you a more tight-knit community you will be hard-pressed to find: strong, proud, caring people with community as its core. And if it was even possible, the spirit of the people of Manchester will grow even stronger this evening.”