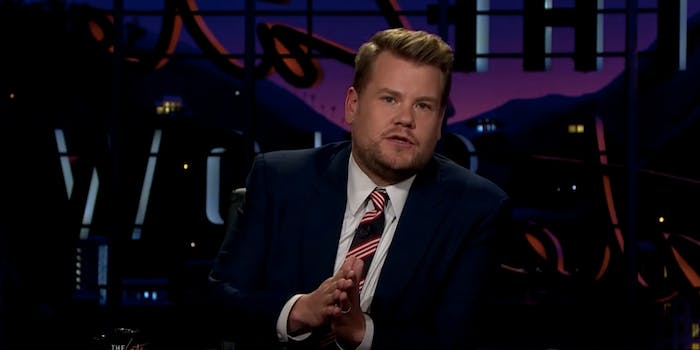 The smallest screen is ready for its late-night close-up.

Late-night television programs have incorporated YouTube into their strategies for years, and late-night newbie James Corden is continuing the tradition by taking his show to the YouTube Space L.A. for an upcoming episode.

Corden will film his Aug. 21 episode at the Playa Vista facility, which has played host to a variety of programs and series for YouTube creators. He won’t just be using the space, however. He’ll also welcome some of YouTube’s biggest names as guests for the evening on the CBS program, like Tyler Oakley, the Epic Rap Battles of History team, and Jenna Marbles.

“YouTube has become a big part of the late-night television experience, and we are delighted to celebrate their 10-year anniversary this way. The show will be packed full of surprises, games and music—all with a YouTube twist,” Late Late Show Executive Producer Ben Winston told the Hollywood Reporter.

The battle for YouTube dominance between late night stars like Jimmy Kimmel and Jimmy Fallon has burned bright over the past year, with segments from each racking up tens of millions of views on the platform after they air on television. Stephen Colbert, who starts his Late Show stint in September, already kicked off his digital presence with several videos on his budding YouTube channel.

Corden has been building his presence since his show launched last March, and he has 870,000 subscribers to date. Some videos, like an episode with Justin Bieber, have clocked in at more than 31 million views on the service.