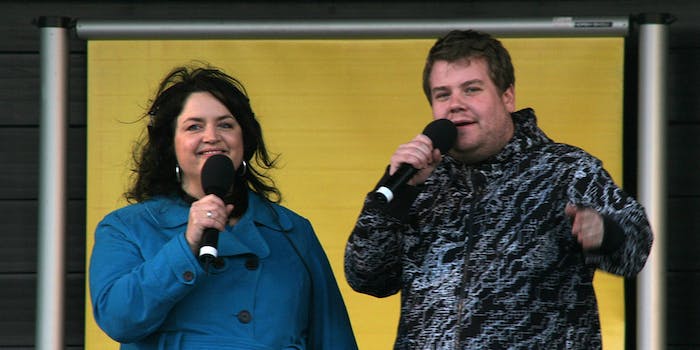 A YouTube guide to James Corden, new host of ‘The Late Late Show’

Now that Craig Ferguson's replacement has been announced, let's look back at what he's been in.

The transformation of late-night TV is complete.

The Wrap reported Tuesday that British actor James Corden will become host of The Late Late Show once Craig Ferguson steps down later this year, disputing earlier rumors that Community’s Joel McHale or Neil Patrick Harris would take the job.

Corden was virtually unknown in the U.S. prior to the announcement, but now he’s now the frontrunner for the position. Neither Corden nor CBS have confirmed the news. Many hoping for some diversity in the late-night TV lineup with a woman and/or a person of color taking over for Ferguson were left sorely disappointed, with Julie Klausner even going on a Twitter rant about CBS choosing yet another white guy.

At 35, Corden would be the youngest host of the show, but he’s already won a Tony and a BAFTA for his previous work on television and stage. He’s set to star in the upcoming adaptation of Sondheim’s Into the Woods as the Baker, but if you can’t wait that long, here’s some of his more memorable work that you can check out.

Corden’s best known in the U.K. for the British comedy about what happens after two people in a long-distance relationship finally meet. He co-wrote and starred in the show with Ruth Jones, and they both played the best friends to the titular characters, and for it he won two BAFTA awards for Best Male Comedy Performance.

Lasting three years, it was a success with both audiences and critics. Netflix has the first season on Instant Streaming, but if you’re looking for the entire series, you’ll need a Hulu Plus account.

He had a memorable turn in Doctor Who as Craig Owens, the man who Matt Smith’s Doctor rents an apartment from while investigating a mysterious matter in the building in season 5. Initially thought to be a one-time companionship, Craig appears again in season 6, this time with a son, and helps the Doctor defeat the Cybermen, one of his many iconic foes.

Almost all of the current Doctor Who run is available on Netflix, but for Corden’s episodes in particular, check out “The Lodger” and “Closing Time.”

Want to see some of Corden’s hosting skills in action? Just take a look at his run as host of the BRIT Awards, which is basically the British equivalent of the Grammys. He shared hosting duties with Mathew Horne and Kylie Minogue in 2009, but he’s had the reins on his own since 2011.

Corden originated the lead role of Francis Henshall in the comedy play One Man, Two Guvnors, where it received critical acclaim. The play started at the National Theatre and made its way to West End in the U.K., and while he eventually left the London production, he reprised the role when the play came to the U.S. on Broadway. He went on to win the Tony for Best Actor in a Play.

Corden’s most recent role was in The Wrong Mans, a BBC Two dramedy co-produced with Hulu, follows Corden and Gavin and Stacey co-star Mathew Baynton as two council co-workers who get caught up in crime and corruption after one of them answers a telephone.

The six-part series is available entirely on Hulu, and BBC Two recently commissioned a second season. However, with Corden possibly taken, it’s too soon to tell how that will affect The Wrong Mans.