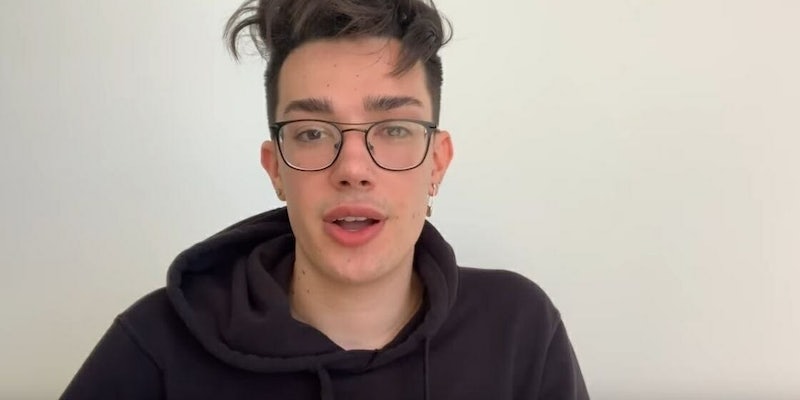 People are not easy to forgive the star after predatory allegations surface.

Since Tati Westbrook threw YouTube’s beauty vlogger community into absolute disarray on Friday with her video exposing James Charles, the 19-year-old Charles has lost more than 2.5 million subscribers. It’s been a stunning—and probably unprecedented fall—for a YouTube star, as Charles, who before this scandal broke open, was seemingly so well-liked.

In a 43-minute video, Westbrook described all she had done for Charles in the early days of his career before he turned his back on her by promoting another beauty company instead of the one she runs. According to Social Blade, a YouTube analytics site, Charles, who had 16.5 million followers, lost about 20,000 subscribers in the three days preceding Westbrook’s video. But after she uploaded her Charles-bashing content, a tsunami hit. More than 530,000 people hit the unsubscribe button on Friday. More than 1.2 million followed suit on Saturday, and 770,000 abandoned Charles on Sunday. At the time of this writing on Monday morning, Charles has already lost 150,000 for the day.

Considering Charles was so popular that he brought the city of Birmingham, England to a standstill earlier this year, this is a stunning fall—and you have to wonder if Charles’ YouTube career has been permanently damaged.

So, why is this happening? The beauty vlogging community clearly is angry with him. Westbrook detailed how Charles had promoted the Sugar Bear Hair brand in an Instagram story at the Coachella music festival after he had previously declined to offer to promote the vitamin supplements from Westbrook’s Halo Beauty company. Charles had previously told Westbrook he had felt uncomfortable promoting her supplements to his preteen fan demographic. Westbrook clearly was hurt that Charles then turned around and publicized her competitor.

But what is probably a more damaging allegation is that she accused Charles of preying on straight men, which led to at least one anonymous accusation against him on social media. People have said he’s attempted to convince straight men to be sexual with him, and there have been other accusations that he’s sexually manipulative in getting what he wants.

In her video, Westbrook expounded on that saying, “You tried to trick a straight man into thinking he’s gay, yet again, and somehow you’re the victim? You know it’s really disgusting to manipulate someone’s sexuality, especially when they are still emerging into adulthood and don’t have everything figured out.”

In his apology video, Charles said, “I’ve been involved in a lot of very strange and unique situations that have left people confused or upset. I learned the hard way about ways that I can interact with the boys that I’m entrusted in, and ones that I should or shouldn’t be talking to … Tati really was one of the people to sit me down and tell me how it looked from the outside. She let me know, ‘Hey, talking to these boys might get you in trouble one day.’ And she was right.”

Regardless of the apology, the damage had been done—and it’s continued to spread.

Others in the beauty vlogging community were also quick to condemn Charles, and people like Kylie Jenner, Kim Kardashian, and Miley Cyrus unfollowed him on social media.

Dozens of celebrities and once friends of James Charles have unfollowed him, here’s a short list:

YouTube star Jeffree Star explained further in a now-deleted tweet in which he wrote, “He is a danger to society. Everything Tati said is 100% true.”

With statements like that, things don’t look for Charles. But the YouTube world is a forgiving place, you might argue. Just ask Logan Paul, whose career seemingly was ruined 17 months ago for posting a video of a dead body in Japan. Just ask PewDiePie, who has posted anti-Semitic content and dropped racist epithets in his videos. Both YouTubers are still thriving.

But unlike Paul and PewDiePie, Charles has made a career earning the trust of the LGBTQ community and allies for bending gender norms—these allegations are an affront to that trust. For Paul and PewDiePie, known for catering to bro culture with their pranks and shenanigans, it isn’t that surprising that their fans would forgive them over a few “insensitivities” and their careers would bounce back.

Maybe in a few months, Charles can release a slickly produced apology video in which he’ll say that he’s learned from his mistakes and that he has a lot of growing up to do. But for now, people are livid. Charles’ apology video from Friday has about 33 million views. More than 466,000 viewers have given it a thumbs up. More than 2.3 million have given it a thumbs down.