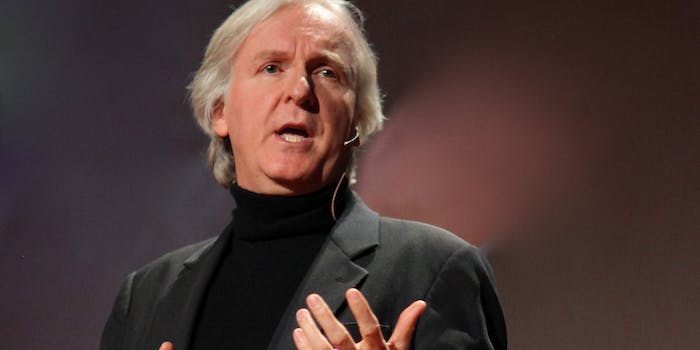 If you’ve ever walked out of a film thinking you could’ve written it better, this must be a dream come true.

If you’ve ever walked out of a film thinking you could’ve written it better, this must be a dream come true. During superstar director James Cameron’s Reddit AMA, user AmishBob had a bone to pick:

I’ve been wondering where the idea to ALWAYS have a character yell “Go, go go!” in your movies came from. Did it start as a conscious thing or did you notice it later and just continue on?

A relatively minor question, but one that Cameron had apparently never noticed. The man behind Titanic, Avatar and countless other blockbusters remarked that “it must just be the way I talk! In fact I just wrote a scene yesterday where a character says ‘Go Go Go!’ The page is open on my computer right now.”

Cameron said he even spoke like it on his famous underwater dive because if “something is really important, you say it three times.” But he thought about it and decided to scratch the line:

“I’m going to change that scene now. Nobody wants to be predictable.” 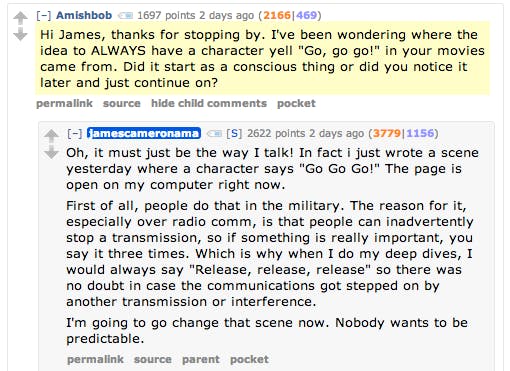 Redditors remarked that this was an anecdote that AmishBob was going to be able to tell around the table for a long time to come. Except Bob will be watching Avatar on repeat, preparing for Cameron’s next AMA.

Cameron could always be pulling our leg, of course. We’ll find out when we see Avatar II.