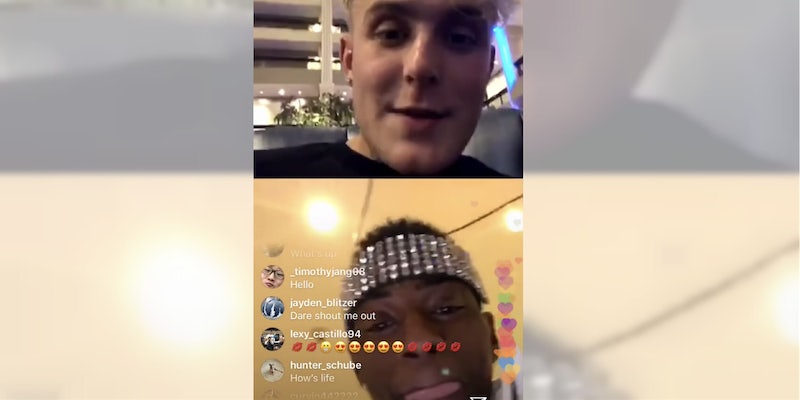 The vlogger says Soulja Boy is 'all talk.'

Jake Paul on Wednesday doubled down on challenging Soulja Boy to a boxing match. The vlogger says he would throw down $20 million, matching the amount the “Crank That” rapper said he would put on the fight.

Paul told TMZ that he’s “pretty serious” about fighting Soulja Boy—and just waiting for a call from the rapper’s manager. Last week, the celebrities gassed themselves up about a fight in a chat over Instagram Live, with Soulja Boy saying he’d bet $20 million since he has a record deal with Warner/Chappell Music in the works.

On Wednesday, Paul suggested that Soulja Boy is “all talk” and doubted he would have the cash to front. But the YouTube star is still in it for the business potential.

“There’s just a lot of controversy around him. I think people would love to see him get knocked out,” Paul said. “I’m sure people want to see me get knocked out, so I think that’s why it’d be a big fight.”

Paul, of course, was the first to suggest a fight with the rapper. “I wanna box @souljaboy,” Paul tweeted last week, to which Soulja Boy replied, “Boy I’ll knock you out.”

Then, in the Instagram Live chat, Soulja Boy said he would beat the vlogger “on sight.”

Paul seems cool with that. He’s ready, he says, “as soon as [Soulja Boy] gives me his manager’s number to sign a contract.”