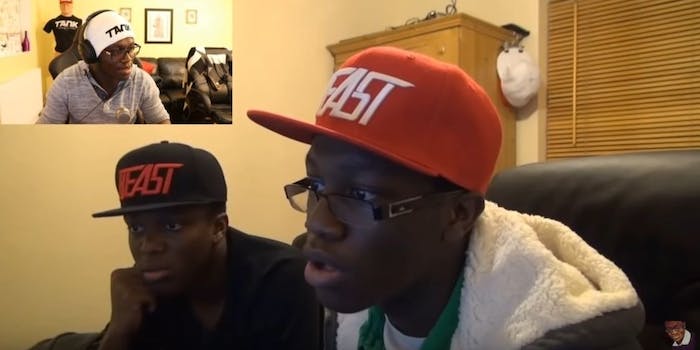 YouTube star KSI and his younger brother Deji are feuding with accusations against each other flying across social media. But after a Christmas Day dustup in which Deji apparently kicked KSI out of his parents’ house, leading to nasty Twitter messages between the two, Deji has begun to hemorrhage subscribers.

It seems that, as a result, Deji has begun to soften his tone and tell the world that he wants to take their beef out of the public sphere and resolve it privately. Still, though, a small percentage of his subscribers are saying goodbye.

According to YouTube analytics site Social Blade, Deji has lost nearly 20,000 subscribers between Tuesday and Thursday, and as of this writing on Friday, the exodus has continued.

KSI (19.8 million subscribers), meanwhile, lost about 1,500 combined subscribers on two days earlier this month. But from Tuesday to Thursday, he gained about 2,000.

Considering Deji has 9.7 million subscribers, the people who have left him are only a tiny percentage of his followers. But as others have pointed out, it’s perhaps not a coincidence that Deji has shown a more conciliatory tone in the past few days.

On Christmas, the two went back and forth on Twitter.

Deji said KSI was playing “the victim card” and trying to “manipulate your fans to hate me.” Both released audio recordings they had made of their argument and Deji said KSI tried to attack their parents—an accusation KSI called “disgusting.”

Deji uploaded a vlog—which he later deleted—where he held back tears and said KSI had made his parents cry. “It’s sad, bro,” Deji said. He also said he wouldn’t take down the videos in which he ripped his brother because he wanted to fight back against what he thought were injustices. KSI responded with more combative tweets.

KSI later wrote, “I’m done with all of this. I won’t be making ANY videos about this. I won’t be tweeting anymore about it too. I’m done. Well done @Deji You’ve got all you wanted. The clout, the fame, our parents and the money from all of this drama. I hope it was all worth it.”

He also wrote Deji was being fake and pretending to want to make up with KSI to “manipulate the audience to stop yourself from losing” subscribers.

On Wednesday, Deji uploaded a new video in which he apologized for being selfish and for upsetting his fans. He said his previous video was impulsive, and he said he and KSI were going to squash their beef privately.