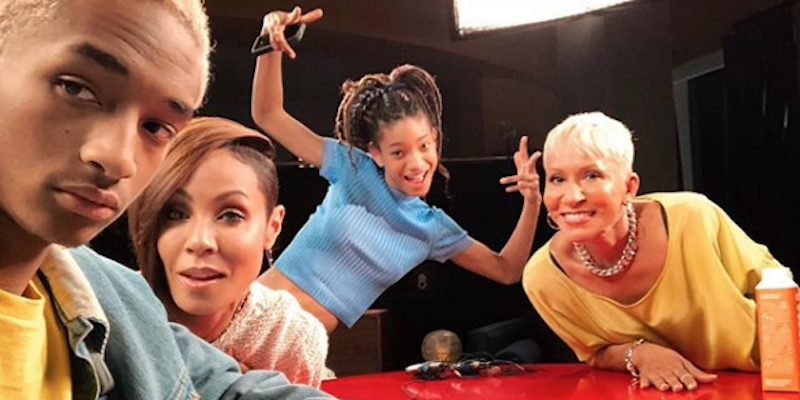 Jada Pinkett Smith opens up about Jaden filing for emancipation

Her new Facebook show continues to bring the heartfelt tea.

In the latest episode of her Facebook show Red Table Talk, Jada Pinkett Smith opened up about what it was like for her son Jaden to file for emancipation from his parents.

Back in 2016, when Jaden was 15 years old, he announced that he was ready to live on his own and wanted to file for legal separation from Pinkett Smith and husband Will Smith. It’s a decision Pinkett Smith described as one of the most difficult she’s ever made.

“One thing that I’ve learned is that every child needs something different,” she said. “At 15 years old, Jaden—and I remember this day specifically, it’s probably one of the most heartbreaking moments of my life. You got to a point where you told me straight up, you were like, ‘Mom, I have to leave here to live my life.’ And I remember thinking to myself—as devastated as I was—I was like, ‘He’s right. The time is now. He’s 15. It’s time for him to leave the house.'”

Pinkett Smith went on to explain that since she was an independent teen herself, she understood that the sooner she let her son come into his freedom, the sooner he’d be able to find himself (and also find his way back to her, she hoped).

At the Red Table this week, Jaden Smith and Willow Smith reveal what it's like growing up in one of the most famous families in America. Adrienne Banfield Norris (Gammy) wonders if the kids may have been granted too much independence by their parents Jada Pinkett Smith and Will Smith.

“I told Will when Jaden was smaller, ‘We’d be lucky to keep him in the house till he’s 16.’ Because he was so mature,” she said. “Being in this lifestyle, in this world, is a bubble. And he wanted out. And I understood that. I didn’t have the bubble, and I knew what… I gained from [having my freedom]. And I knew the sooner I let him go, the faster he was gonna come back.”

Jaden has been acting since the age of 8 and had never faced the financial considerations Jada and Will had growing up, so Pinkett Smith said she ultimately understood the value in her son wanting to continue his education outside of the shadow of his celebrity parents.

The rest of the episode features daughter Willow and grandmother Adrienne Banfield Norris and addresses the ways that parent-child relationships evolve over several generations in a family.