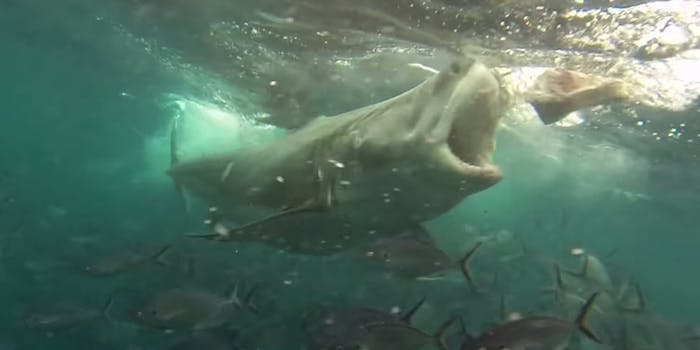 It’s no secret that every time a shark dies, a GoPro employee begins weeping.

But the staggeringly high number of sharks that humans kill—100 million each year, or three sharks per second—should have us all in tears.

For Shark Week, the PBS Digital-produced YouTube series It’s Okay to Be Smart has taken a look at what would happen if 100 million sharks became 100 percent of all sharks. What would a world without sharks be like?

Pretty dire, is the conclusion. Pointing to examples where overfishing of sharks has already caused algae pollution and the collapse of fishing industries, host Joe Hanson describes the potentially disastrous consequences of wiping out the entire top of the oceanic food chain.

Given the number of irresponsible claims the Discovery Channel has bandied about during Shark Week in recent years, it’s no surprise that scientists, researchers, and shark-lovers are turning to YouTube to counter the popular image of sharks as terrors of the sea.

Five other science shows on YouTube teamed up to offer week-long alternatives to Shark Week via their YouTube channels. Hank Green‘s science channels Sci Show and The Brain Scoop both contributed, along with Minute Physics, Smarter Every Day, and Veritasium. Together, the shows produced a dozen videos devoted to debunking myths and educating viewers about the need for shark conservation.

The shows cheekily referred to the project as “Several Consecutive Calendar Days dedicated to Predatory Cartilaginous Fishes.” Check out each of their videos below.

It’s Okay to Be Smart