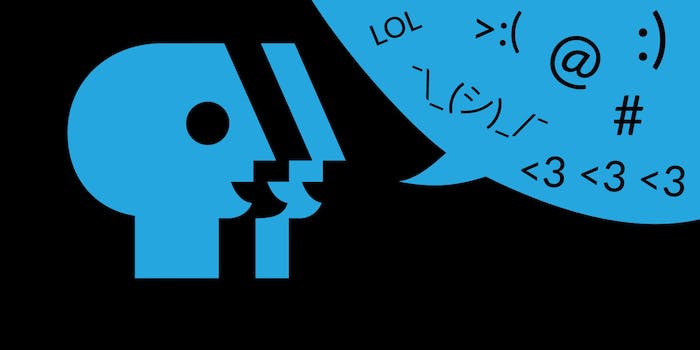 We all have an Internet tongue now.

Does the Internet have its own dialect? Can you talk “Internet?” That’s the initial question posed on the most recent PBS Idea Channel video by host Mike Rugnetta.

“I was just sitting at my computer and it dawned on me, ‘Do I have an Internet accent?,” Rugnetta told the Daily Dot. “I put it out on Twitter and then responded to myself because there’s no pronunciation so maybe it’s a dialect. Then I had a lot of debate with followers on the platform.”

The shift in an understanding of digital talk as a kin to actual speech in the linguistics community has been a developing process, accelerated by the proliferation of social media. Now, linguists use social media to study global language and develop massive data sets of speech that were practically impossible in years past. This has led to the understanding that what may have been generalized as “Internet speak” years ago, which is actually more diverse than a standard Internet dialect imagined by outsiders.

The Internet doesn’t have one standard dialect. So Rugnetta delved into the ideas of “communities of practice” and “speech communities” to address how different corners of the Internet construct identity through language.

“[Speech community theory] is not necessarily focused on interests or shared goals. It really is just a group of people who spend time together in a specific place,” Rugnetta said. “Can you call what you do on 4chan or Reddit—are you working toward a goal or a shared practice, or is it just shared proximity?”

For Rugnetta, he first learned his Internet language styles on IRC posting about music and cyberpunk, and newsgroups where he says he would craft messages with the aim of sounding as “with it and part of the community” as he could. Since he has learned multiple conventions to navigate different Internet speech communities, from the reaction GIFs of Tumblr to the hashtags of Twitter. “Code switching,” as Rugnetta calls it, between various forms of speech online comes naturally now, and he sees those codes of speech moving from the digital to the physical, at least within his offline community.

“I would definitely say amongst my closest friends, all of whom are ‘Internet professionals,’ there’s definitely a level of speaking as though you are typing that’s not only permissible but expected,” Rugnetta said. “That’s a way of speaking I would not expect or engage in myself in other settings. I think there’s definitely already a certain amount of Internet related code switching that happens in geek space.”

Rugnetta said fans have been defining their own speech communities in the YouTube comments on his video, and debating points of his arguments, which he’ll address in the next Idea Channel video.

“We had [a commenter] talk about the idea of ‘registers’ instead of ‘dialects,’ so that’s something we’ll get into,” Rugnetta said. “We also have people describing the characteristics of the speech community they hang out in online. And someone wrote a really good one about TVTropes, and they mention YMMV, and TVTropes is the first place I ever saw that mentioned. We’re very lucky, or comments section is very exciting—a lot of people willing to have strange conversations with each other.”