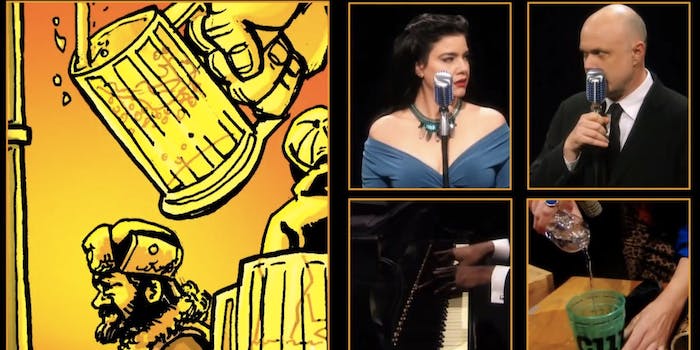 YouTube content continues to push the boundaries of art as well as explore and remix new formats, and the newest entrant into the webseries scene is no exception. Intergalactic Nemesis is billed as “radio-play graphic novel” mashup that debuted last week, although the series has a long and storied history offline.

Starting as a live radio serial done in installments in Austin, Texas, the show brings together live sound effects, actors, an accompanist, and graphic novel panels to form a unique performance piece. The group has toured the country with their live show and aired on Austin’s local PBS affiliate, KLRU. It was through their relationship with KLRU that they connected with PBS Digital Studios for the opportunity to create a 17-week webseries, which series creator Jason Neulander sees as a terrific partnership.

“We were the recipient of a grant from PBS Digital Studios that was a small amount guaranteed and they matched dollar for dollar what we raised on an Indiegogo campaign up to a $20,000 match,” Neulander explained. “That really helped a huge amount. it allowed us to shoot the thing in the Austin City Limits studios, it allowed us to have enough camera people, it allowed us to use highest quality equipment.”

In addition to the PBS Digital support, the group has a leg-up in moving from offline to a digital experience, in that they already had a completely finished and fully rehearsed show.

“Taping actually happened over the course of 2 days,” Neulander told the Daily Dot. “We did straight through without stopping. We did a few pickups, but basically the whole thing was done in two takes.”

Neulander said the challenge for translating the live-action version of Intergalactic Nemesis to screen was organizing and animating all their individual comic panels in a way that keeps the story flowing.

“We knew what the priorities were in terms of the visual experience of watching the show,” he said. “But to figure out how to exactly do that so that the mechanics of how we tell the story is second. The first pass through was almost impossible to watch. So much was happening all at once, scattered across the screen almost randomly. That has been an enormous amount of work.”

Despite the challenges, Neulander and his team are already talking about shooting two seasons, creating an Intergalactic Nemesis trilogy. It’s a big jump for a group that had only had experience using YouTube to upload promotional trailers, but Neulander says they’re interested in really exploring the world of YouTube and its network of stars as they move forward.

“I feel like being in Austin, or just the way I’ve gone about doing work which is entirely the indie route, I have totally not figured out how to navigate making those connections [in the YouTube space],” he said. When asked about future collaborations with YouTube stars like Tyler Oakley or Jenna Marbles, he was enthusiastic. “I’d love to make that happen, and I’m absolutely open to it. Bring it on!”

If that means succuming to the ever-present YouTube lure of brand deals too, Neulander is game.

“We are open to that kind of pimping ourselves out, no problem,” he laughed.