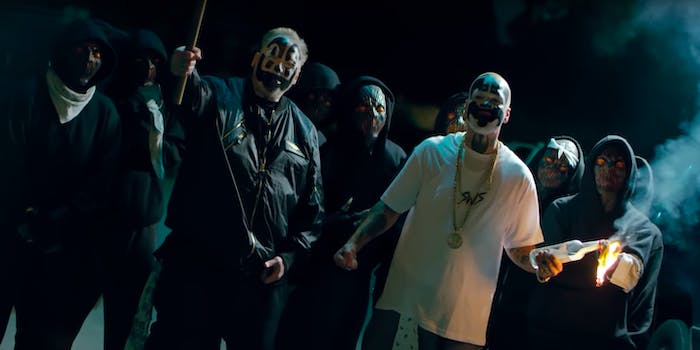 Was this the most countercultural event of SXSW?

Fans clogged the parking lot of Come and Take It Live, a humble metal venue located several miles from downtown Austin, where the music portion of SXSW was in full swing. These people had their own idea of festivities: a thrice-in-a-lifetime acoustic show by the most hated band in the world—the Insane Clown Posse.

My coveted platinum badge did me no good here. If I wanted to see Violent J and Shaggy 2 Dope in the flesh, I had to cough up my $25 just like everybody else. As the bouncer patted me down, he asked me to empty my jacket pocket and said, “I won’t stick my hand in there in case there’s a needle in there.”

ICP billed its third-ever acoustic show as a SXSW event, but just like every other facet of its career, this gig existed on the fringes of popular culture (and society at large). This show was bizarre even by its standards: Instead of blasting the audience with the usual 200 gallons of Faygo, the Detroit horrorcore trailblazers sat in wheelchairs, dressed in bloody prison scrubs, and regaled fans with the stories behind their most beloved songs. They also talked about buttholes—yours, mine, theirs, everyone’s.

It seems unbelievable today, but 20 years ago, ICP scored two consecutive platinum albums with The Great Milenko and The Amazing Jeckel Brothers, the latter of which reached No. 4 on the Billboard 200. All this despite writing songs about decapitating rednecks and telling conservative suburbanites to go fuck themselves. That kind of controversy engenders lifelong fealty, even if time has diluted the group’s crass shock-rap antics. ICP will never be bigger than 500-person clubs again, but it will never be smaller, either.

Over the years, ICP has commissioned approximately 7 billion different T-shirts emblazoned with its signature “hatchetman” logo. Audience members sported a variety of those shirts from all different phases of the band’s career, which they relished.

The “they” in J’s proclamation was likely the FBI, which in 2011 labeled the Juggalos a “loosely organized hybrid gang,” giving haters even more of a reason to judge the band and its fans. (ICP sued the FBI for discrimination, but the case was dismissed.) It seems fair to assume the majority of the civilized world will always hate the two face-painting, shit-talking bozos from Detroit who started a revolution.

But here’s the cold, hard truth: By playing a sit-down, cash-only acoustic show and selling physical CDs at the merch table during one of the most progressive, tech-savvy festivals of the year, the Insane Clown Posse actually threw the most countercultural music event of SXSW. All were welcome at this carnival, which made for an impressive middle finger to the glossy, hyper-exclusive media circle jerk happening just across the highway.

But make no mistake: I never want to hear “Chicken Huntin’”—acoustic or otherwise—in the flesh again.