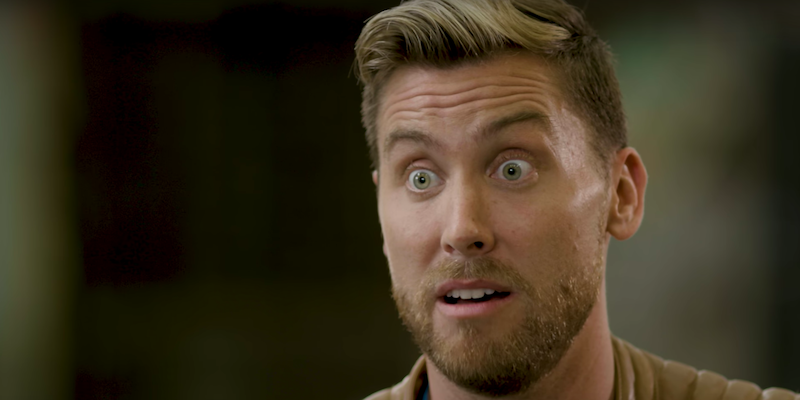 Lou Pearlman's greedy cons were only the beginning.

Even without the megastar musicians at its core, The Boy Band Con: The Lou Pearlman Story would still be a riveting true-crime documentary about the fraudulent mastermind who spearheaded one of the biggest musical movements of the past 25 years. The Lance Bass-produced film, which premiered at SXSW on Wednesday, portrays Pearlman as a three-dimensional figure who fell victim to his own greed, with a bombshell reveal that makes The Wolf of Wall Street look like Pee-wee’s Playhouse.

In hindsight, Pearlman seemed almost destined to become a full-time fraudster. Growing up as a pudgy outcast in Queens, New York, in the ’60s, he shared a passion for aviation with his only friend, Alan Glass. (Glass, who died last year, recorded every phone call he took, and his archival conversations with Pearlman over the years prove invaluable.) The two founded Airship Enterprises Ltd. and leased a massive blimp they didn’t even own to clothing company Jordache. Their actual blimp was a lemon that seemed to crash a little too conveniently, awarding Pearlman a $3 million insurance claim. Pearlman pocketed the money, parted ways with Glass, and relocated to Orlando, where he founded a new company called Airship International, leasing blimps to McDonald’s, SeaWorld, and MetLife.

Inspired by the success of New Kids on the Block, Pearlman entered the next phase of his career by founding Trans Continental Records and launching the Backstreet Boys and NSYNC. This is the best-known part of Pearlman’s story, but The Boy Band Con takes a deeper look at how he ruthlessly pitted the bands against each other in order to stoke their “rivalry” and make them outwork each other. Members of both bands—including Bass, J.C. Chasez, Chris Kirkpatrick, and AJ McLean—speak in awed tones about Pearlman’s charm and hospitality, how he would do anything or buy anything at the drop of a hat to make the boys feel more comfortable.

Of course, it was all a lie. In reality, both bands had signed some of the worst contracts in music history, which listed Pearlman as a sixth member of each group and allowed him to rob them blind. Relations quickly soured, and both bands extradited themselves from their contracts through messy lawsuits. The Backstreet Boys and NSYNC went on to release Millennium and the aptly titled No Strings Attached, respectively, both of which shattered first-week album sales records at the time.

Pearlman wasn’t finished, though. He continued to launch new artists including C-Note, Take 5, girl group Innosense, and Aaron Carter in an attempt to replicate his previous success, to no avail. Meanwhile, Pearlman built Trans Continental into a global entity that housed roughly 100 different businesses, convincing unwitting retirees to invest in the fraudulent Trans Continental Airlines. The Boy Band Con includes interviews with these investors along with numerous Trans Continental artists (including several sad moments with Carter, who seems dazed and refuses to acknowledge the breadth of Pearlman’s wrongdoing).

The film also shines a light on Pearlman’s disturbing sexual proclivities. His sexual preference remained a mystery, but several band members recall Pearlman telling them to take their shirts off during rehearsals so he could inspect their abs. O-Town member Ashley Parker Angel recalls an instance where Pearlman invited him up to his hotel room to receive a “special massage” that would give his muscles a pump without having to work out. (Pearlman claimed he minored in physical therapy in college.) Most heinous of all, Innosense member Nikki DeLoach reveals that Pearlman had installed cameras in his tanning bed, which the girls would often use at his home. In the wake of the Me Too movement and recent damning music docs such as Leaving Neverland and Surviving R. Kelly, these allegations cast Pearlman in a light somewhere between Harvey Weinstein and Michael Jackson.

Pearlman’s house of cards eventually collapsed, as all cons must. In the end, he defrauded more than 2,000 Trans Continental investors with debts exceeding $300 million and was sentenced to 25 years in prison. The Boy Band Con‘s most remarkable feat is showing how Pearlman’s two crowning achievements were merely cogs in the vast machinery of his deception. Yet the film rises above a mere hit piece and instead provides a thoughtful, captivating study of a criminal mastermind whose fraudulence knew no bounds. Following Pearlman’s death in 2016, many of his victims couldn’t help but feel a strange empathy for the man who just desperately wanted to feel included. The Boy Band Con gives them an opportunity to process their mixed emotions, if not find closure entirely—which is ultimately more valuable than any amount of finger-pointing.