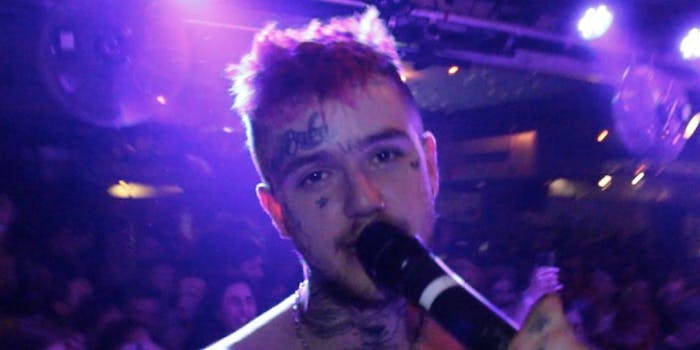 The film traces Lil Peep's ascent and its consequences.

If you want to see a document of Lil Peep’s life, much of it was laid out on social media. The rapper streamed his life and music to millions, and fans latched onto that immediacy and intimacy. The documentary Everybody’s Everything adds some context and backstory.

RELEASE DATE: 3/10/2019
DIRECTOR: Sebastian Jones and Ramez Silyan
The new doc traces Lil Peep’s ascent and its consequences while also serving as a meditation on grief and loss.

Sebastian Jones and Ramez Silyan’s film, which debuted at SXSW, opens with a chaotic scene: Peep trying to find his way to the stage at a New York City show in 2017, the camera struggling to focus on him. It’s an interesting vantage point into the life of Gustav Ahr, whose Long Beach, New York, childhood seemed idyllic, at least in archival footage. He’s seen at roughly 4 or 5 years old trying to grab a toy microphone, and his creative streak started early, according to mother Liza Womack, who gave him the nickname Peep and co-produced the film. The doc paints his parents’ divorce as a pivotal moment, sending teenage Peep into his bedroom and his feelings. He evidently knew of his father’s infidelity, but the film doesn’t dig much deeper into why their relationship was so fractured.

The film zooms out on the chapter of sadboi SoundCloud rap that spilled out of L.A. in 2016 and 2017, framed by interviews with associates and collaborators with varying degrees of face tattoos. Peep, who was briefly homeless, moves into a loft on L.A.’s Skid Row, where he and other lost boys embrace filth and chaos. No one has their own bedroom, and boundaries are fairly nonexistent in this found-family dynamic. People follow Peep everywhere he goes, and so do drugs.

Peep was often lumped in with “Xanax rap,” but that’s a bit of an oversimplification. His music obviously connected with people on a more emotional level, and it’s jarring to realize his ascent happened over roughly a year. But less than two years after his death, it feels too soon to assign him any deeper cultural significance.

The thread that gives the film structure is Peep’s maternal grandfather, John Womack Jr., who reads encouraging handwritten letters he sent to Peep as his profile was rising. Womack is a former Harvard history professor and author of the book Zapata and the Mexican Revolution, and it’s clear he fostered some of Peep’s ideas about equality, such as making sure those around him had the same things he did. But that mindset also became a trap for Peep. In Womack’s scenes, the influence of the film’s co-producer, Terrence Malick, is more pronounced. How did he get involved in a doc about a SoundCloud rapper? That also links back to Womack: He appeared in Malick’s 1973 film Badlands and is a longtime friend. (Jones also worked with Malick on his 2017 music drama Song to Song.)

Peep’s death from an accidental overdose of Fentanyl and Xanax in November 2017 shocked fans, and the film always has that in its sights, which makes it doubly hard to watch Peep walk at Paris Fashion Week and start shaping his career away from negative influence months before his death. Everybody’s Everything derives its title from one of Peep’s last Instagram posts, but the film still shows what happened in the months before his death with a sort of detachment, a reluctance to jump in and say something.

Everybody’s Everything addresses the controversy surrounding Peep’s death: How could his friends—the ones always there—not notice he was dead for hours? Near the end of the film, one early collaborator calls out some of the “clout chasers” who didn’t really care about Peep. But this isn’t a document of judgement or blame. It’s a family’s meditation on grief and loss; it starts with chaos and ends with calm.