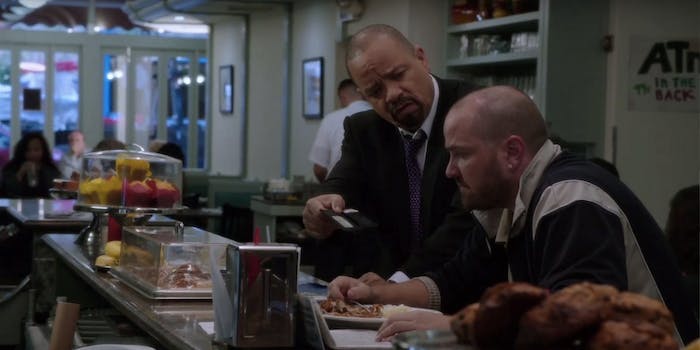 'Turns out that joint was laced with cat litter and soy sauce. Kids are callin' in Brown Christmas.'

There’s a hot new meme on the Internet, but if you want to understand it you’ll have to speak with Ice-T’s Law & Order detective Fin Tutuola — because as everybody knows, he’s always hip to whatever trouble the kids are getting into these days.

As popular as SVU and other Dick Wolf-related spinoffs have been over the years, there’s a certain predictability—some might generously call it “notes” to hit while others would go with “cliches”—Wolf’s shows adhere to. One such moment is the inevitable instance when law enforcement stumbles upon some sort of strange, underground danger that the kids are all getting into… and Ice-T needs to explain it to them and the viewers.

RELATED: Ice-T voicing ‘Dora the Explorer’ should be a real thing

“Turns out that joint was laced with cat litter and soy sauce,” says T’s NYPD detective in one popular screengrab. “Kids are callin’ it Brown Christmas.”

Of course, that line of dialogue never actually appeared on Law & Order, and in the picture we see of Ice-T his character is saying something completely different. But does that make the hilarious “revealing moment” any less plausible?

In another popular take on the theme, Tutuola explains a different drug to Richard Belzer’s Detective Munch. “It’s called Brenda,” he explains. “Kids try it at parties, next thing they know they’re online, gettin’ paid to yell at their own genitals.”

The screengrabs seem to be attributed to Sean Tejaratchi, an Internet personality who posted them on his blog. 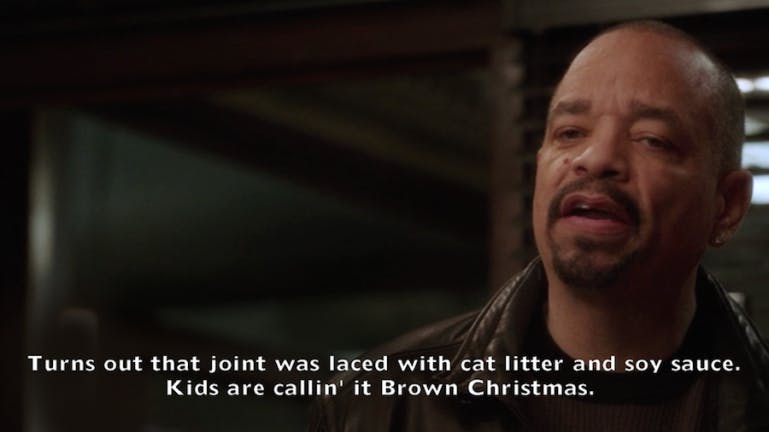 “Toxicology says she OD’d on some new narcotic called ‘Peanut Brittle,’” the rapper-actor explains in one to some assembled co-workers who need enlightenment. “It’s made from trail mix and hand lotion.”

As the meme takes off, it will likely yield the good, the bad, and the ugly of imitators. But other popular screengrabs currently have Tutuola explaining cruel business practices (“Six-year-old-girl. Promoted to manager, then forced to fire herself right before Christmas.”), senseless violence (“They made him fight a newborn baby. Told him it was his own younger self, time-travelin’ from the past, tryin’ to take away his birthday.”), and returned toxicology results (“Lab found traces of cocaine and sourdough. They call it Sweet Chowder. It’s a drug soup from Baltimore.”).

Whether you’re a fan of Law & Order or not, it’s an easy meme to laugh at. But as Ice T’s Tutuola would be quick to point out, there’s a far more troubling matter we should all be concerning ourselves with. “These dudes kidnap kids and teach ’em to play piano,” he explains in another screengrab. “The night before their recital, they break their fingers.”